Welcome, this is the discussion board of TASVideos.
If you have a question, please read the Site FAQ first to see if your question has already been answered.
Be sure your posts conform to Site Rules
We also have a Discord server and an IRC channel #tasvideos at irc.libera.chat...
1 2 3
Posted: 12/16/2014 2:09 AM
Quote

HUZZAH!
Have fun doing your TAS boys whoever picks it up.
Disables Comments and Ratings for the YouTube account. These colours are pretty neato, and also these.
Posted: 12/16/2014 9:11 PM
Quote

Joined: 3/2/2010
Posts: 2171
Location: A little to the left of nowhere (Sweden)
As requested, here's a version of the script with waypoint support: http://tasvideos.org/userfiles/info/24442790218451707 Usage is described in the wip upload info. A note is that the script must be restarted if the waypoint prompt is closed and the waypoint shall be changed. As far as I know there is no way to listen to the "closed" event and re-spawn the window for that case.
Posted: 8/20/2015 8:51 AM
Post subject: Stage testruns!
Quote

Recently I've been working on a few testruns for a few stages, to get a feel for the controls under TAS conditions, movement tricks, and as an useful reference for the items in some stages. And, of course, what the game looks like under TASing conditions. Link to video User movie #24752021115216437 Link to video User movie #24944560609703812 Also, I created a Game Resources page here: Wiki: GameResources/PSX/BugsBunnyLostInTime EDIT: One more: Link to video User movie #25154338211580258
http://www.youtube.com/Noxxa <dwangoAC> This is a TAS (...). Not suitable for all audiences. May cause undesirable side-effects. May contain emulator abuse. Emulator may be abusive. This product contains glitches known to the state of California to cause egg defects. <Masterjun> I'm just a guy arranging bits in a sequence which could potentially amuse other people looking at these bits <adelikat> In Oregon Trail, I sacrificed my own family to save time. In Star trek, I killed helpless comrades in escape pods to save time. Here, I kill my allies to save time. I think I need help.
Posted: 9/22/2015 9:26 PM
Quote

Joined: 9/23/2015
Posts: 1
Hello. I noticed that the TAS was getting some progress so decided to check it out and these test runs are looking really good. Like I said before, I'm the main RTA runner for this game and would like to help with anything I can on this project. I don't really have much experience with TASing sadly but this could be a nice opportunity to start out. Okay, now with that out of the way, how about some strats and whatnot? First, here's the current Any% WR in case you haven't seen it yet: http://www.twitch.tv/yuuki_s/c/6547351 While I do plan on running 100% at some point soon, most of what you do in Any% you also do in 100% plus the Golden and regular Carrots of course. Other than what's on the WR, there's some little things more. For example, the second electric fence skip at Carrot Factory (which I failed miserably on the run but it's possible). Alternatively to that, if you stand in at certain pixel on the right of any conveyor belt, you get teleported to the other far side of it. It should be able to abuse it to crazy levels on a TAS since it's really precise as to do it on RTA. Also, Theoretically you could maybe skip the first electric fence by going around it with TAS execution. I never been able to do it tho so I can't be so sure. Combine that with the fact that you can stand on one of the pipes for a shortcut to skip the switch for the fence and you'll save a bunch of time. Lastly, First person view cancelled jumps. If you jump and then hold the first person view on the frames where Bugs is about to jump, you prevent him from moving so he immediately lands again. How can this be useful? Well, the only way to actually cancel rolls is to jump. You roll, you jump, you first person to cancel the jump and all this puts you back into standing. From here we can easily do a kick hop. So all this would save some small frames here and there we'll optimize the run bit by bits. Might be pretty situational actually but might as well use it. Oh, and if you wonder about why the run skip most of the dialogues between characters, that's a PC exclusive glitch, Music storage, so don't worry much about that. But, yeah I should be getting more stuff as I go so if anything I'll share it here :)
Posted: 7/19/2016 8:04 PM
Quote

Me and AleMastroianni have been looking into starting a 100% TAS a little while ago. It will definitely take some time before it gets going, because there are quite a few things that still need to be figured out (and it's a quite lengthy run). Yes, the game is a non-stop collectathon, and there's no way to get around it. 120 Clocks will always be a requirement for any%. 100% takes 122 Clocks, 333 Golden Carrots and 495 regular carrots and is only around 20 minutes longer than any%.
http://www.youtube.com/Noxxa <dwangoAC> This is a TAS (...). Not suitable for all audiences. May cause undesirable side-effects. May contain emulator abuse. Emulator may be abusive. This product contains glitches known to the state of California to cause egg defects. <Masterjun> I'm just a guy arranging bits in a sequence which could potentially amuse other people looking at these bits <adelikat> In Oregon Trail, I sacrificed my own family to save time. In Star trek, I killed helpless comrades in escape pods to save time. Here, I kill my allies to save time. I think I need help.
Posted: 1/26/2022 1:37 PM
(Edited: 1/26/2022 6:21 PM)
Quote

I've been working on routing and effectively researching the game physics to the best of my ability in the past year or so - while also TASing the game from scratch a few times; also the normal carrots route, including the latest skips, is completed and adjusted for optimal tas movement: https://docs.google.com/spreadsheets/d/1d91NUBHgrhf5cmwKnDVsUyrlW_nzvQcZGwcKO9ugae0/edit?usp=sharing The new major skips, besides level specific platforms long jumps, which would be quite a few to list, are the following: What's Cooking Doc - Bird Skip Skips a full revisit of the level, saving a major chunk of time due to routing and loading times avoided. Performed as shown in the video by forcing your way into specific xy coords by proper item placement on near the gate. Link to video Pirate Era - Skull Door Power Skip No need to delay the visit of this level, as the jump power is not required and would even take more time to let Bugs say the magic words to jump on the platform to open the door. Link to video Follow The Red Pirate Road - Magic Door Clipping This is performed by blocking your way on the left of the door, effectively creating another invisible wall by manually placing the wheel object in the level, while also using another one, which pushes Bugs inside the door when thrown correctly, when it bounces back from the wall. Link to video
Posted: 1/26/2022 5:02 PM
(Edited: 1/26/2022 5:03 PM)
Quote

Ah, apologies! The link should be available to be seen by everyone now, let me know if that's not the case, anyway, here's a pic of the current route 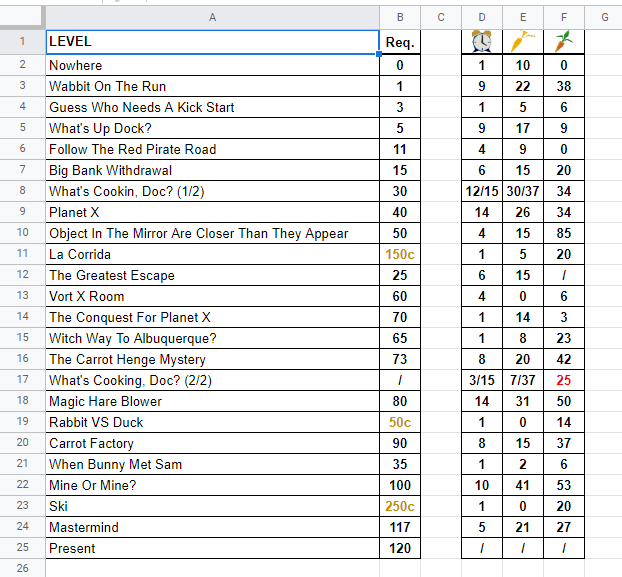 Also, the autowalk script made from Noxxa and you has been incredibly helpful, even for research, so thanks for that! The WIPs optimized to a decent level (btw thanks to Noxxa for checking them out and giving feedback from time to time) are actually a bunch of Nowhere (like 9 of them lmfao) and Wabbit On The Run TASes, since i had extreme problems with octoshock tasing (thats in the past now thanks to Nymashock); here's the most recent one on Octoshock before the desync: Link to video
Posted: 1/26/2022 6:25 PM
Quote

Joined: 3/2/2010
Posts: 2171
Location: A little to the left of nowhere (Sweden)
Now it's all good. And permissions look correct to. Thanks! I'm happy the script is useful. Mostly thanks to Noxxa that it exists. I really enjoyed that short WIP, very well done! Here's hoping that Nymashock gets finished up and merged.
1 2 3