Super Mario 64 DS was released in 2004 for the Nintendo DS. The game is a remake of Super Mario 64 for the Nintendo 64, bearing some new features on its storyline, gameplay and graphics. Unlike Super Mario 64, this time there are 4 playable characters, but only Yoshi is available at the start. This new submission is an improvement of 16302 frames to our previous publication due to a new strategy which lets us finishing the game with just one star, and some stage improvements that are described below.

Final bowser wasn't improved. Maybe you guys have noticed that after killing both Bowsers, it looks like I didnt even try to do a bit of freerunning to improve the entertainment. The reason to this is that Bowser's dialogue after dying happens before if you don't move and you stay on a certain spot of the platform.

Firstly we would like to thank AJC868 (YT user) for discovering the 8 star door skip strategy. It was the main motivation for us to improve this TAS and test new route ideas. It is also important to mention that he was also the first person proving that Dire Dire Docks skipping was possible with Mario.
Also we would like to thank the youtube user "pannenkoek2012" for giving us the idea to kill yoshi while getting the key.
Baxter: Submission file updated at the author's request.
Baxter: Very nice improvement to the previous run; accepting.

I will try to make the youtube encode as I did in the previous publication, however I'm currently having problems with Avisynth so if I see that I can't make it work I'll let other person to do the encode. Also the description will probably have some modifications, I was the one writing it and I'm not that good at english so probably I'll be correcting mistakes if I find them, but that's mostly it.
Posted: 1/23/2012 9:47 PM
Quote

Experienced Forum User
Joined: 2/18/2010
Posts: 156
Location: home
Does every incarnation of Super Mario 64 have to be this broken? Needless to say, I was impressed by the new glitches and the fact that you saved a little over 5 minutes off the old run. Yes vote. Edit: [Offtopic] I just noticed that I'm officially a member now [/Offtopic]
My user name is rather long, feel free to call me by htwt or tape.
Posted: 1/24/2012 1:10 AM
Quote

Will wait for encode before voting but I recently saw the published run and the new trick so should be a yes. Edit: dang that was great. Loved the route switch in BitS and all of the other fun glitches. Yes!
Posted: 1/24/2012 12:15 PM
Quote

Im doing the encode right now just give me around 30mins time cause i had to quickly get it now im watching and encoding the playback Edit: dang i desynced something is wrong with edit cannot use for some reason
Disables Comments and Ratings for the YouTube account. These colours are pretty neato, and also these.
Posted: 1/24/2012 12:49 PM
Quote

yes i made sure im going to double check and if down again ill just edit this one unless someone updates then i wont edit: Shoot i got emulator problems dont know why though
Disables Comments and Ratings for the YouTube account. These colours are pretty neato, and also these.
Posted: 1/24/2012 3:35 PM
Quote 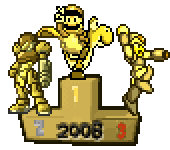 Experienced Forum User
Joined: 11/20/2011
Posts: 27
Location: UK
Watched on Nico. This run has loads of nice route arrangements and impressive glitches. Yoshi died when got the key and Mario got his ass burnt to go into that hole. So funny. Definitely a yes vote. This improvement reminds me the Super Mario 64 TAS. Sooner or later, Super Mario 64 DS will finally have its own 0 star run. Looking forward to that.
Posted: 1/24/2012 6:17 PM
Quote