Welcome, this is the discussion board of TASVideos.
If you have a question, please read the Site FAQ first to see if your question has already been answered.
Be sure your posts conform to Site Rules
We also have a Discord server and an IRC channel #tasvideos at irc.libera.chat...
Vote: Did you find this movie entertaining? (Vote after watching!)
Submission Text Full Submission Page
Dolphin 5.0
DSP HLE
MD5 checksum: 7ea14a9d4f923060da97129961cfc612
Not sure what BIOS or other information I need to provide. I have never had a desync issue with the submitted movie, let me know if it's a problem and I can provide more setting information.

Awesome stuff, yes vote for sure!
[14:15] <feos> WinDOES what DOSn't 12:33:44 PM <Mothrayas> "I got an oof with my game!" Mothrayas Today at 12:22: <Colin> thank you for supporting noble causes such as my feet MemoryTAS Today at 11:55 AM: you wouldn't know beauty if it slapped you in the face with a giant fish [Today at 4:51 PM] Mothrayas: although if you like your own tweets that's the online equivalent of sniffing your own farts and probably tells a lot about you as a person MemoryTAS Today at 7:01 PM: But I exert big staff energy honestly lol Samsara Today at 1:20 PM: wouldn't ACE in a real life TAS just stand for Actually Cease Existing
Posted: 6/18/2018 6:51 PM
Quote

I've seen bits of your WIPs and enjoyed them, so I was looking forward to watching the full TAS. This is really good stuff! From the rapid fire pistols and every other weapon, to the floating gun due to the cutscene walk in mission 2 (might recommend as a screenshot), to the huge out of bounds skips, and to the fast paced action, this was a great watch. Only complaint I have is when you're a little rough with the camera but that's relatively minor. Nice work, yes vote. EDIT: Dolphin runs this game like crap for me, but I can confirm the movie syncs.
Posted: 6/18/2018 9:40 PM
Quote 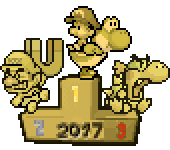 Joined: 10/14/2013
Posts: 335
Location: Australia
In addition to the encodes available on the publication page, here are some extra downloadable encodes for this run: Additional resolutions: 720p: Direct Link | Torrent 1080p: Direct Link | Torrent Lossless encodes: Standard: Direct Link | Torrent Native*: Direct Link | Torrent * Encodes marked with an asterisk are done at native resolution with no graphical enhancements (such as anti-aliasing or anisotropic filtering). To download these files you may have to right click on the link and select "save link as" (this option may be named differently depending on your web browser).
I'm not as active as I once was, but I can be reached here if I should be needed.