Welcome, this is the discussion board of TASVideos.
If you have a question, please read the Site FAQ first to see if your question has already been answered.
Be sure your posts conform to Site Rules
We also have a Discord server and an IRC channel #tasvideos at irc.libera.chat...
Posted: 12/3/2018 5:07 AM
Post subject: Donald Land
Quote

I'll just state some further ideas I had about improving our file, but I have no proof for any of it (except the stage 7 boss trick). Of course as was already stated, if the stage 7 boss is killed during it's head transition it flies off the top of the screen almost instantly. I did take a screenshot of the 1 frame the boss's dead hitbox actually still existed before it flew off screen though: 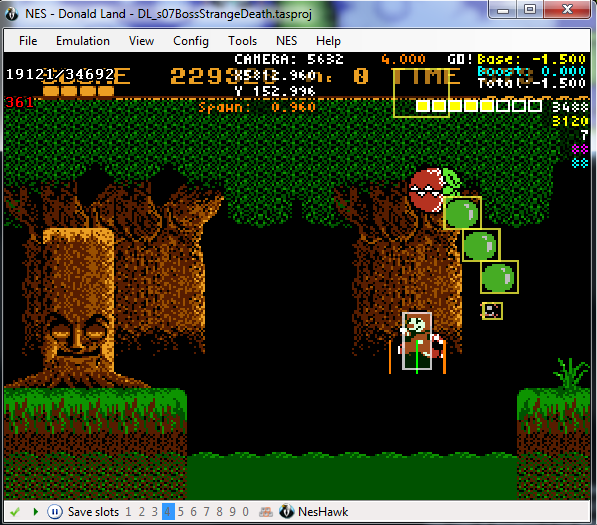 Anyway, with that being said almost any small improvement before stage 7 would probably make this trick possible. Which means I come to my other idea. I was wondering if it were somehow possible to get those throws to land on the garbage boss tiles in stage 4 and still have ronald land on the boss's existing mouth instead of falling all the way to the floor. It seems we miss a phase of boss tiles existing while we're trying to get back in position. Again, no proof just theories. Also, I'm pretty sure some of the other submissions had a better Hamburglar fight near the end of the game: attacking the ground so that the apple's timer runs out sooner than it would by attacking him directly at the start. I didn't actually compare times, just observations. In fact I believe stage 1 can even be improved in theory. In my head, we should have less frames with no apple boost than we do and also we should be flying directly into the boss to get as early hit as possible in. I don't know if any setup would allow for that; but it makes sense in my head. That's about all I have for the moment, I might update this post if anything else comes to mind.
Current thoughts: Hachiemon (J) for GBA.
Posted: 12/3/2018 2:40 PM
Quote

Our team's lua. Note: You need the font "SF Intermosaic B" to be installed. Otherwise, edit line 203 to a different font. - Tile viewer - Lets you view and drag around enemies/objects (I'm proud I was able to code this) - Various memory values... I think bugs/tricks-wise we did not find anything new. Subpixels, buttons held (etc.) is carried over from level to level. And lag can be reduced by 1-3 frames on loading screens by button presses. BrunoValads might want to post our RAM map and sprites information which mainly he worked on.
Youtube • Livestream • Progress 11th TASer of the Decade 2010-2019 !
Posted: 12/3/2018 4:20 PM
Quote

There's a looped instruction that can be interrupted via these button presses. -7 found the loop and made a lua to show which frames needed altered to minimize the lag by forcibly breaking out of the loop.
Posted: 12/3/2018 4:34 PM
Quote

Experienced Forum User
Joined: 3/8/2014
Posts: 36
Good job y'all. I'm the person who made those TAS WIPs you all saw for the contest. It's kind of funny; I made those specifically with the intention of drumming up interest from actual TASers as I had little to no knowledge of my own on how to optimize one. I'm also the original realtime runner for the game and it's kind of my baby. I discovered two of those wrong warps on my own and I was jumping out of my carseat watching the Oasis World warp. I had theorized that it would be possible to warp if you could get in the correct position, but had no idea how to get there as the boss is dying. Gonna read through the notes and watch again, but I just wanted to thank y'all for doing it. You made a shitty TASer and a lazy retired speedrunner very happy :)
Posted: 12/6/2018 12:56 AM
Quote

Here was also an interesting, yet completely useless thing I found at some point: Link to video What's happening: the apple I attached to a skull that flies underneath the elevator explodes at just the right time. An exploding apple has an extended hitbox which is larger than the unexploded apple and is actually enough to reach Ronald's hitbox. If timed perfectly the apple expanding can pull ronald off the elevator object that glues ronald to it. Because the elevator requires you to have 0 x velocity in order to trigger it, suddenly now ronald gets a boost applied by the apple after it's triggered. That's why ronald moves to the right. Again, nothing happens as the elevator object is still going on it's path and it reaching the top of the screen is actually what triggers the transition (to my knowledge anyway).
Current thoughts: Hachiemon (J) for GBA.
Posted: 12/6/2018 3:28 PM
Quote

Editor, Experienced Forum User, Player (41)
Joined: 6/22/2005
Posts: 997
I looked into this game a bit early in the contest and found these addresses that don't appear to be listed above or that complement the above info:I also modified my Wizards & Warriors III Lua script to exhaustively generate vertical jump information, but analysis of the first 0x3000000 trials showed that all of the data was present after the first 0x2000. Only ran it in the first level, though. I can upload that info, if desired, but it may not be useful due to the bomb boosts/jumps.
Current Projects: TAS: Wizards & Warriors III.
Posted: 12/9/2018 8:58 AM
Quote

Editor, Experienced Forum User, Skilled player (1164)
Joined: 9/27/2008
Posts: 1072
I haven't felt any desire to really finish Donald Land, tying together all known improvements. The easy thing would simply be to graft Team 7's castle onto Team 4's run, and call it mostly optimal. I do strongly believe that the movement patterns we (Team 4) took on flat ground and over the abyss is the fastest strategy to take. Start-ups, "rough terrain", and meshing together other things seems to be stuff Team 7 had some respectable knowledge in. The 2.75 apple tosses are attractive for having an extra 0.25 over the 2.5 apple drops. I've been finding that the delays where we're at zero boost to be much worse with the 2.75 tosses in general, as the apple doesn't actually move right away when thrown rather than dropped. They're totally apples, not bombs. How can such a lovable character like Ronald be throwing dangerous explosives everywhere? I'm sure with the natural sugar in them, apples can explode, right? ... Right? Besides, who hasn't dreamed of flying through the sky with nothing but a sack of apples and a strong throwing arm? I'll be around in case there's some random bits Team 4 did that needs explaining, or possibly prettify some scripts. I just don't want to do the TASing.
Posted: 12/12/2018 5:16 PM
Quote

At this point this seems like the best option, since it seems no one is willing to actively improve this (myself included). It's still a pretty entertaining run and I think it should be published and people can improve it later.
Current thoughts: Hachiemon (J) for GBA.
Posted: 8/27/2019 11:41 AM
Quote

I've successfully added team 7's last stage to team 4's movie (with some modifications in order to sync). Should I just directly add team 7's rerecord count to this movie? Not sure how this typically works. EDIT: For now I'll just use the combined rerecord count. What are people's thoughts on me claiming co-authorship? I had to edit the end of team 4's second to last stage and one portion of team 7's final stage to get it to sync.
Posted: 8/27/2019 2:54 PM
Quote

Claim it. Re-syncing is a part of authorship when combining parts from multiple runs. Think about it this way. If we had two published runs of some game (a 100% and an any%) and you saw ways to combine parts of each to yield an even faster any% run; the combination and re-syncing is your contribution. In this case it would be appropriate to include yourself as an author on the new submission even though you didn't necessarily add anything new/novel. The only difference between that hypothetical scenario and the Donald Land situation is that Donald Land isn't currently published. You're still contributing via combination and re-syncing, so you should get authorship credit.