Welcome, this is the discussion board of TASVideos.
If you have a question, please read the Site FAQ first to see if your question has already been answered.
Be sure your posts conform to Site Rules
We also have a Discord server and an IRC channel #tasvideos at irc.libera.chat...
Posted: 7/3/2007 3:41 PM
Post subject: Black Belt
Quote

Joined: 5/1/2004
Posts: 4096
Location: Rio, Brazil
I've found 2 bugs... 1 saves time on a miniboss (hit the knife thrower as soon as he enters the screen. I imagine this works for all minibosses, but he's the only one that can be in reach when he enters the screen), the other freezes riki until the timer reaches 0 and he dies (kill Oni so that his mask falls off the screen). here it is: http://www.mediafire.com/?9tzd2mzjnjg 7:10 ok, it wasn't 30 seconds faster, but that's almost good.
aka Nesrocks http://www.youtube.com/user/UoBtExFODA https://nesrocks.com https://twitter.com/bitinkstudios
Posted: 7/3/2007 7:59 PM
Quote

Have you concluded if hitting the enemies with your leg is stronger than your fist or the other way around? Anyway, it looked pretty okay. In the first stage when you fought that blue miniboss (I think he was the third miniboss), was that optimized?
Posted: 7/3/2007 9:03 PM
Quote

Joined: 5/1/2004
Posts: 4096
Location: Rio, Brazil
I did everything pretty optimized as I could with only 1 savestate slot. It was hard to do much testing and frame counting because of that, also because of the status message covering the frame counter during pause. Any hit does the same ammount of damage to minibosses. The bosses have special requirements... Each one has his own weakness to which move does more damage and some moves don't do damage at all. About the blue miniboss, I think you mean the one with claws. He likes to jump high, and I had to move like that to avoid him doing that. Just to clear something else: every miniboss comes from either side of the screen depending on which half of the screen Riki is. That's the oposite side. The knife thrower also does this, but he takes a while to actually get into the screen, so you can get to him before that.
aka Nesrocks http://www.youtube.com/user/UoBtExFODA https://nesrocks.com https://twitter.com/bitinkstudios
Posted: 7/3/2007 11:59 PM
Quote

Joined: 5/1/2004
Posts: 4096
Location: Rio, Brazil
Yeah, except that there are many differences, it's not just a sprite change. For instance, the Hokuto no Ken version has platforms... Also, I can't stand that version's music, making a TAS there less enjoyable by me. I kinda like Black Belt's music. I don't know to what percentage the game's music should influence in choosing it for a TAS.
aka Nesrocks http://www.youtube.com/user/UoBtExFODA https://nesrocks.com https://twitter.com/bitinkstudios
Posted: 12/31/2009 5:33 PM
Quote 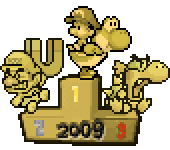 Necro posting ftw! So i have a couple of questions, first, does this was ever submited/rejected/canceled ? Then i have to say im feeling the complete opposite about choosing black belt over hokuto no ken, when playing black belt its obvious its a rip off ken, this is very annoying when you know the serie because its like, put mario with tails, as a kid i remember been highly pissed off because i was watching the anime and riki, rita or such shit felt very gay. Most obviously, i prefer the music in hokuto no ken, as well as graphics That been sayd, on the game itself, from the different playground video i saw on youtube, apparently the main difference is not much on plateforms but essentialy on difficulty... black belt is way much easier... So for that matter, choosing black belt mean easy mode to me, just for that its justified imo to use hokuto no ken From what i saw, theres also a sort of warping in hokuto no ken thats not present in black belt (see here) This probably save time, well, main question now is are you still working on this FODA or just abandoned ?
Tasvideos.org personal page
Posted: 12/31/2009 5:46 PM
Quote

Joined: 5/1/2004
Posts: 4096
Location: Rio, Brazil
I'm not working on it, and it was never submitted. All I did was the testrun. Of course you're free to do hokuto no ken! It really seems like a more complete game. I'm just much more familiar with black belt, which is why I chose it.
aka Nesrocks http://www.youtube.com/user/UoBtExFODA https://nesrocks.com https://twitter.com/bitinkstudios
Posted: 12/31/2009 5:51 PM
Quote

Im very familiar with black belt too, that was the only version available to me back then :p Well ill give a try at hokuto no ken when i got some time, thats probably the game that attract me the most to tas on this system.
Tasvideos.org personal page