Welcome, this is the discussion board of TASVideos.
If you have a question, please read the Site FAQ first to see if your question has already been answered.
Be sure your posts conform to Site Rules
We also have a Discord server and an IRC channel #tasvideos at irc.libera.chat...
Vote: Should this movie be published? (Vote after watching!)
Submission Text Full Submission Page
This is an improvement to NES Excitebike; faster times are obtained for all six tracks with a combined savings of 1.38s. Time is saved by taking ramps at higher speeds and by a technique discovered by XKeeper which paradoxically gains time by going slower.

First, some quotes from the forums:
"Excitebike is a fun game to play, but it's quite easy to play it nearly perfectly by regular means." --Bisqwit, 2004
"Pretty bad idea doing a timettack I dont think it can be faster than someone at Twin Galaxies. Very easy game." --Phil, 2004
Well, five years and five submissions later, I think we're getting close...;)
This submission really uses just 3 new techniques to save time:

Not much to say here. Excitebike is simple in that the only way to boost speed above 3.25px/frame is to hit the triangle ramps. Speed can then be maintained indefinitely.
A couple minor discoveries allowed me to lose less speed taking the ramps in the 1st 3 tracks. First, it's better to push up (switching lanes upward) at the last possible frame to take the shortest possible jump. Second, the game seems to detect ramp collisions only every other frame. This can lead to cases where one drops right through the ramp at a certain speed, but by dropping a frame somewhere, one can hit the ramp instead.

Avoid getting too far ahead of the screen

This trick, discovered by XKeeper, makes use of the way the game tracks the bike's advancement on the track and saves time on tracks 0, 1 and 5.
Basically, a value ($64) is tracked, from 0 to 8, indicating how many pixels the bike must advance before showing more of the track. At a speed of 1, it would take 8 frames to get from 8 down to 0; at speed 4, it would only take 2 frames. Each frame, the bike's speed is subtracted and the value is checked. If it's <0, the track advances and the value is increased by 8. If >0, the track doesn't advance, and the value is left as is.
However, when speed is greater than 8, the value can actually wrap below 0 (255, 254, etc). If speed is kept >8 long enough, the value hits <128, and several frames must elapse before advancing again.
Why does this happen? My suspicion is the game logic just checks the highest bit in determining whether to advance. For values 128-255, this bit is 1. At 127, though, the high bit is 0, so the game interprets it as the bike needing to travel 127 pixels before advancing.
One further note is that one can finish a track a handful of frames earlier if the value is 128<value<0 when crossing the finish line. So, there is no "optimal speed" per se; the best time is achieved by exceeding a speed of 8 for a brief time, then keeping speed at/near 8 so as to finish with the value < 0.
I abuse this behavior in various ways to do some fun stuff. When the value is <0, the game will advance on every frame as long as the speed is at least one. So, I actually slow down substantially at the end of tracks 1 and 4 without losing any time.

Finally, there's a global counter which determines when, at the beginning of a track, the bike can start accelerating. However, this timing is not fixed in relation to when time starts! The optimum situation is when the bike starts 2 frames before the timer does; the worst case is the timer starting 1 frame before the bike. I drop a frame in track 2 to manipulate this effect to save a couple frames in track 3. For tracks 3 and 4, the 0.02 savings is entirely due to this behavior. Unfortunately, for track 5, dropping frames in the prior track did not alter the (worst possible) behavior, probably due to a frame rule. So track 5's lap time is 3 frames slower than in the published run due to this effect, despite having a faster overall time.

I can't say this run is perfect, but I can say I have no ideas for improving it further, despite trying many, many things. Good luck to all who try!

I did the best I could with style in this game. I decided to try for a certain "theme" for each track to try to spice things up...I added subtitles to the run to make the viewer aware, but here they are:
I did other things, like intentionally overheating on track 4 to make it interesting. Not sure if I did JXQ's run justice in this respect, but I tried...enjoy!

Thanks to JXQ, Luke G, and FODA for the very enjoyable prior runs. Thanks to XKeeper for a very impressive technical discovery, and to Randil for helping me figure out the game's timer behavior.
mmbossman: Going slower to go faster, huh? Interesting. Accepting as an improvement.
Raiscan: Processing slowly to go faster. 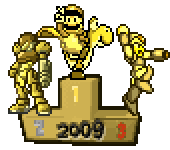 Joined: 2/11/2007
Posts: 1522
Very nice, Mr. Tom. The technical details are impressive and the stylistic choices are well thought out and executed. What will you conquer next? :D Here is an encode with subtitles: http://dl.getdropbox.com/u/1665523/excitebike-taspreview-LordTom.mkv
I make a comic with no image files and you should read it. While there is a lower class, I am in it, and while there is a criminal element I am of it, and while there is a soul in prison, I am not free. -Eugene Debs
Posted: 8/21/2009 2:01 AM
Quote

Joined: 7/2/2007
Posts: 3960
Thanks for the encode, Alden! Looked like a solid run. With this kind of improvement it's difficult to see the actual changes that made the run faster unless you use frame-advance and look at the inputs and memory. But hey, the small numbers are slightly smaller now, and that's good enough for me. :)
Pyrel - an open-source rewrite of the Angband roguelike game in Python.
Posted: 8/21/2009 2:41 AM
Quote

He/Him
Editor, Experienced Forum User
Joined: 6/23/2009
Posts: 2206
Location: Georgia, USA
Very nice job! I liked seeing the details in your submission comments about the new improvements. I would've never suspected that Excitebike could get this technical. Also, the style choices were clever; my favorite was probably track 5, since I would probably want to be that bouncy and carefree if I could ride with TAS power.
Used to be a frequent submissions commenter. My new computer has had some issues running emulators, so I've been here more sporadically. Still haven't gotten around to actually TASing yet... I was going to improve Kid Dracula for GB. It seems I was beaten to it, though, with a recent awesome run by Hetfield90 and StarvinStruthers. (http://tasvideos.org/2928M.html.) Thanks to goofydylan8 for running Gargoyle's Quest 2 because I mentioned the game! (http://tasvideos.org/2001M.html) Thanks to feos and MESHUGGAH for taking up runs of Duck Tales 2 because of my old signature! Thanks also to Samsara for finishing a Treasure Master run. From the submission comments:
Posted: 8/21/2009 5:03 AM
Quote

Loved it. With the fact that I've speedrun this on console, it's impressive to see how much faster my best track time compares with the TAS. Track 0: Me - 43.69 TAS - 36.19 Quite ridiculous times indeed. Yes vote of course. :D
Super Mario Bros. console speedrunner - Andrew Gardikis
Posted: 8/21/2009 7:15 AM
Quote

Experienced Forum User, Player (93)
Joined: 3/20/2008
Posts: 466
Location: Montreal, Quebec, Canada
This game sure has wonky physics, particularly when the bike moves vertically off the screen. Otherwise, everything looked well optimized so I'm giving this a yes vote.
Posted: 8/27/2009 5:54 AM
Quote

Experienced Forum User
Joined: 11/11/2006
Posts: 1235
Location: United Kingdom
The .mkv encoded for the publication includes the author's subtitles from the movie file. These are likely to be enabled by default depending on your media player, but can be disabled if desired. Enjoy :)
<adelikat> I am annoyed at my irc statements ending up in forums & sigs
Posted: 8/31/2009 7:12 PM
Quote

Joined: 12/23/2004
Posts: 1850
1 = 37.84 :) It's nice to see that this movie was finally improved. I was wondering if anybody would take what I learned and put it to use! Congratulations on discovering the other tricks, too. I probably never would have found them if I tried TASing it.
Perma-banned
1 2