(Link to video)
Teenage Mutant Ninja Turtles, the arcade game, in 12:15. Except, this isn't titled 'The arcade game' because it was played in arcades, and so it was just TMNT. Its not like a Honda Civic is titled "Honda Civic, The Automobile that Drives on Roads." Anyway, rant over. As this is my first non-shining and non-rpg solo submission in 4 years, it was quite a change to do 4 players at once. However, I had determined that I wanted to do this run since I learned it was playable in FBA. I needed multi-track ability, and that didn't exist in FBA. Lua to the rescue!
note, game version is World. Unfortunately, World is not yet a submission option. 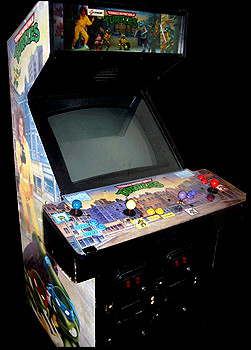 Multi-track scripts work by allowing the author to control each player individually, and then having the script play back movements. While I was able to create the movie doing this, it caused many headaches. All enemies alter their position, attacks, and activities based on all 4 turtles. Thus, modifying the movements of one turtle would cause another turtle's attack to miss, to happen too late, and various unpredictability.
Additionally, there is a bug in FBA's emulation of TMNT. If you load a state during a lag frame, the game freezes, while the music continues. The only way to continue is to restart the movie, which has special problems. Lag only happened in 3 places in the run, once in the sewer, and twice in the technodrome. However, due to this glitch, I almost gave up on the run twice.
Finally, there is a bug in FBA related to a pointer for music playing. When saving a state, this pointer is not saved. This means that anytime you create a savestate, it will only work for that session of FBA, and that playing of the movie. Restarting the movie, as in the lag-bug, eliminates the ability to use that savestate. Thus, I had to fast-forward to where I had been working in the run. I've probably fast-forwarded through big portions this entire movie 50 times, due to the lag bug. The frustration every time these bugs worked together was painful.

All turtles have a special move that can be activated by pressing attack and jump on the same frame. Mike, Don, and Leo all have the exact same special attack. Raphael, on the otherhand, has a unique special move. His rolling kick is the fastest form of movement, however it does 2 damage to the foot clan, unlike the other special moves which do 3. However, since I can move past the foot clan if they are off screen, I often use Raph's attack backwards to try and keep the screen moving forward. This is the reason Raph's kill count ends up way less than the other turtles. Additionally, he can catch-up to the other turtles using this attack.

Things to watch for: A Foot solider getting hit by the big ball. Donatello takes a bullet from Rocksteady.

Things to watch for: Hitting of street objects to kill Foot clan. A warp glitch which allows me to move towards the Foot faster. Mike playing around in the Sewer.

This is the first time I encountered the awful lag glitch, right at the falling gate. You will notice the run becomes sloppy around that point, due to constant replays of the movie. I'm still happy with how it turned out, given the pain I went through. Also, Baxter Stockman only has 24 HP, and each special attack does 3 damage! Also, this part of the run introduces another annoyance, the Mouser holes. While usually I can push past Foot, if there are 4 or less trailing, at this point, the Mouser holes act like 8 Foot, and therefore I have to wait for 4-6 of them to exit the hole to move past it.

Another fun level where I get to play with the scenery. Watch for: The Car running over a bunch of Foot, Foot smacking into Signs, and explosions everywhere! Also, Bebop and Rocksteady is my favorite boss-battle of all time.

Watch for: Riding on cars, and killing guys on motorcycles (way harder than it looks!)

One of the more annoying levels, as the level won't change length based on the number of kills. I attempt to keep it interesting by racking up as many kills as possible.

A pretty generic level, once again the mouser holes slow me down at the beginning. I particularly enjoyed the kills right before the 'over-grown corkscrew.' Also, the boss is the first of the 3 really annoying boss battles. Lieutenant Granitor has 48 HP, and no matter what attack is used, he takes only 1 damage.

I encountered the lag glitch twice in here, once with the moving turrets, and again at the bottom of the elevator. This made me want to scream. Additionally, General Traag had 44 HP, and same 1 HP damage rule. Krang, of course, made things worse by having 60 HP/1 dmg.
Finally, Shredder. Shredder has 192 HP and 16 HP after his helmet comes off, but each special (Raph's included) does 7 damage. This means Shredder effectively requires 30 attacks. Also, Shredder is invincible while he splits, so I try and kill as few of his clones as possible, while maintaining consistent damage on him.
Seriously? 3 damage, then 1 damage, then 7? What were the programmers thinking?!?!?
(* I tagged this run with 4 player, and noted the speed vs. entertainment trade-off, because it is possible to spawn bosses with slightly less HP by having only 1 turtle alive at the time the boss comes in. However, this would require having the run be 4-player-ish-but-only-part-of-the-time. Future versions may want to use that time saver, I chose not to for the run's quality.)
Suggested Screenshot:

Thanks to:
adelikat: Accepting for publication
Aktan: Processing...

Joined: 3/9/2004
Posts: 4588
Location: In his lab studying psychology to find new ways to torture TASers and forumers
antd: Thanks for the encode. It was such a deliciously artful run! Krang killed over boiled olives like dad used to make, I love it! Much thanks to my ninja TASer DarkKobold for making this run, you rock! Excellent entertainment, pure awesomeness!
Warning: Opinions expressed by Nach or others in this post do not necessarily reflect the views, opinions, or position of Nach himself on the matter(s) being discussed therein.
Posted: 8/11/2010 4:26 PM
Quote

Experienced Forum User
Joined: 7/22/2010
Posts: 53
Man, I totally played this when I was little! (I also totally sucked at it, but hey, I was little.) What a fantastic epilogue. Really entertaining run, easy yes vote. Mm, maybe not... It's still a short, quickly repeating animation that takes up much of the screen. :x
Posted: 8/11/2010 6:06 PM
Quote

Joined: 3/9/2004
Posts: 4588
Location: In his lab studying psychology to find new ways to torture TASers and forumers
No offense taken! In actuality, if I wanted what YouTube had, I'd download the MP4 from them myself. What he did though is make it easier for others that don't know how to do that.
I myself have not even watched this run yet
Warning: Opinions expressed by Nach or others in this post do not necessarily reflect the views, opinions, or position of Nach himself on the matter(s) being discussed therein.
Posted: 8/11/2010 6:22 PM
Quote

He/Him
Experienced Forum User
Joined: 5/5/2009
Posts: 901
Location: QC, Canada
I wasn't against antd's upload. I simply want to offer people the option to get the highest quality file possible. I will do the same for the Castlevania run. That's the first complain of this kind. After 4 more, I will change.
Posted: 8/11/2010 8:10 PM
Quote

Experienced Forum User, Player (230)
Joined: 7/30/2006
Posts: 207
Location: Alefgard, USA
Great Movie. It is especially fun to watch after comparing to it an unassisted 4-player playthrough seen here.. http://www.youtube.com/watch?v=1mMq8j6QNzc I do have a question though... why are there pizzas sitting in the middle of the highway and in the Technodrome?!?!?!
Posted: 8/11/2010 8:36 PM
Quote

Experienced Forum User
Joined: 9/20/2005
Posts: 14
Location: Morocco
I used to play this game on the arcade long ago. Possible improvement (?) : I had found a bug that works in the arcade when i was a kid Stage 2 after the girl on the skateboard passes, you start going in a (sorta) vertical street. You can strangely kill the enemies in that place with a simple diving kick. You can also do the following : From the top of the street start spamming down + attack like crazy. The turtle with start going down and attacking, but the camera will start going to the right, until your turtle gets inside the bulding from which the enemies are coming from. ONce there you can experiment many things, your turtle starts moving VERY fast and you can even see the boss in the top of the building before it comes to fight you. Anyways, with this you can at least skip all the enemies before the boss. Another bug wildely known (but maybe not useful in a speedrun) is that when you are standing on an edge (exactly on the edge) enemies won't attack you. Places where u can do this : Stage 2 where u get the pizza, The sewers and also stage 4 next ot the first explosive barrel. Skateboard stage ; you can actually pass this stage without killing many enemies. just keep on dodging attacks, then kill the enemies after sometime passes (the same time that passed in this run). That's all the stuff i remember about this game. hope it helps. I was pretty good at this game. but the best achievement i could do was reaching Shredder with one credit. This game gets insanely harder and harder as long as you don't lose a life (instead o fighting 2 of .. say, machine gun robots, you face 10 of those ..... =_=) each enemy gets multiplicated until it gets impossible to gets passed them.
Posted: 8/11/2010 9:13 PM
Quote

Joined: 10/27/2004
Posts: 1972
Location: Making an escape
Chaos in a half shell! Is the volume difference between the music and the voices supposed to be so great? The music was incredibly muted.
A hundred years from now, they will gaze upon my work and marvel at my skills but never know my name. And that will be good enough for me.
Posted: 8/12/2010 3:28 AM
Quote

Joined: 3/9/2004
Posts: 4588
Location: In his lab studying psychology to find new ways to torture TASers and forumers
Aktan: Thanks for the encode. Yes, I actually downloaded and watched it. Now why are they looking for the Technodrome in the Technodrome? Those Teenage Mutant Pizza Turtles sure are strange. DarkKobold: Fantastic job, kept me entertained throughout. Going to do Turtles in Time? That'd be even more amazing.
Warning: Opinions expressed by Nach or others in this post do not necessarily reflect the views, opinions, or position of Nach himself on the matter(s) being discussed therein.
Posted: 8/12/2010 3:48 AM
Quote

If I could vote yes more than once, I would for this movie.
https://personalitygrowth.com/entp-myths-stereotypes-misconceptions-cliches-and-tropes-that-are-inaccurate/
Posted: 8/12/2010 3:50 AM
Post subject: andrewg to the rescue
Quote

Joined: 3/9/2004
Posts: 4588
Location: In his lab studying psychology to find new ways to torture TASers and forumers
You should have a chat with andrewg about that. Thread #9125.
Warning: Opinions expressed by Nach or others in this post do not necessarily reflect the views, opinions, or position of Nach himself on the matter(s) being discussed therein.
Posted: 8/12/2010 12:34 PM
Quote

Experienced Forum User, Publisher
Joined: 4/23/2009
Posts: 1283
And again, you are suppose to download the streaming version. I do hope you remember next time as it is getting a bit tiring tell you this.
1 2 3 4