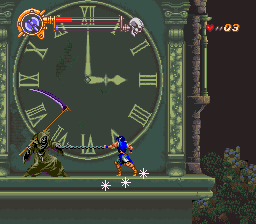 Watch on YouTube
Author notes Discuss
7.83 / 10
Castlevania: Dracula X (1995), released in Japan as Akumajō Dracula XX, is actually a toned-down remake of a PC Engine title known as Rondo of Blood (1993). It stars Richter Belmont, supposedly a son of Juste Belmont from Harmony of Dissonance, on a mission to save Annette (said to be his girlfriend) and Maria Renard (a young vampire huntress said to be his girlfriend's sister), along with a number of their fellow villagers, from imprisonment by Dracula (said to be the villain) and his minions.
Unfortunately, in this SNES port Richter isn't too much of a fast walker - unlike his father and the later Belmont clan descendants - so his fastest way of moving is constant backflipping (so don't be surprised by the author's choice of traveling method).
This movie is a 00:11.48 second improvement to the previous version by pirate_sephiroth.
Published on 12/12/2011 7:43 PM
Obsoletes:
SNES Castlevania: Dracula X by pirate_sephiroth in 14:07.60