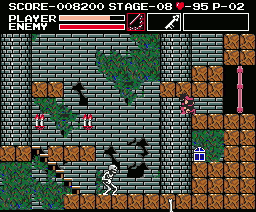 Watch on YouTube
Author notes Discuss
6.95 / 10
As you can see here, the original Castlevania wasn't only on the NES, but also on the MSX computer. Author scrimpeh did on the MSX Castlevania what Phil Côté & Morrison did on the NES Castlevania.
This version is different in some important ways. Some new gameplay elements include the requirement to collect a white key in each stage in order to advance, the removal of the chain whip after each boss battle, and the ability to buy subweapons from sitting bystanders in white or red clothes.
This is an improvement of 01:14.90 over the previous run thanks to a few new time-saving tricks.
Note: To play the OMR file, you'll need to have openMSX 0.8.2 / 0.9.0 with the Panasonic FS-A1WSX BIOS installed.
Published on 8/20/2013 8:30 AM
Obsoletes:
MSX Vampire Killer by scrimpeh in 17:02.65