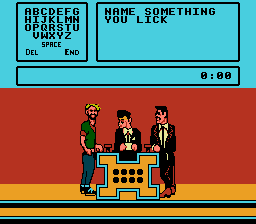 Watch on YouTube
Author notes Discuss
4.9 / 10
Published on 11/21/2022
Family Feud is a game show that has received multiple video game adaptations to a number of consoles. As with most game shows, you compete against others as part of a group to answer questions. Unique to Family Feud is that the questions given have multiple answers, so the answers given must be the closest to the public consensus answers for a contestant to get the most points. For the NES version, a game is won when a player reaches $20,000.
SpaceColonizer has rigorously studied the game in order to beat it in record time. 2 controllers are used to shorten the intro. To keep things from getting too boring, questions are not repeated at any point in the run, which would have saved time. For more details, you can read the author's notes.
See full publication history
Game:
Family Feud
Genres:
Gameshow

NES Godzilla: Monster of Monsters! "Destr0y All M0nsters" by SpaceColonizer in 06:47.91 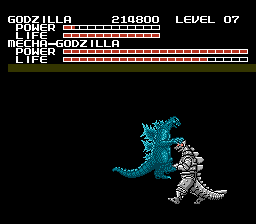 Watch on YouTube
Author notes Discuss
6.75 / 10
Published on 12/20/2022
Godzilla: Monster of Monsters! is the first Godzilla video game for the NES. In this game, you play as both Godzilla and Mothra as they travel across planets to beat various other monsters such as Hedorah, Gigan, and King Ghidorah. On each planet are many alien armies that are there to stop you from reaching the monster that controls each planet. To portray this, each planet is shown as a virtual gameboard with Godzilla and Mothra on one end and the enemy monster on the other. Each space is either empty, has an alien army, or has an enemy monster. You level up by destroying anything that gets in your way, and you progress to the next planet by defeating an enemy monster in one-on-one combat.
In this run, SpaceColonizer opts to play the "Destr0y All M0nsters" mode using a special password. Here, all the enemy monsters in the game are on one board and are set to their endgame levels while Godzilla and Mothra are at level 8. The mode is considered complete when all the enemy monsters on the board are defeated. You can read the author's notes for more details.
See full publication history
Game:
Godzilla: Monster of Monsters!
Genres:
Action
Fighting 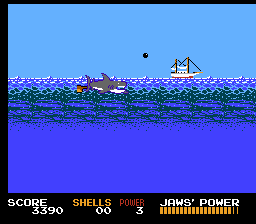 Watch on YouTube
Author notes Discuss
6.43 / 10
Published on 11/25/2022
This video game adaptation of Jaws appears to be based on the second half of the movie of the same name, which focuses mostly on finding the shark and killing it. None of that boring stuff such as the mayor refusing to close the town for the summer holidays despite warnings of potential shark attacks.
In this run by SpaceColonizer, the attack level is upgraded to 3 to kill Jaws in a single encounter. Luck manipulation is used to get encounters in the shortest time, and a purposeful death is used to avoid a bonus scene. He also manages to save 2 seconds over his previous run through rigorous optimization.
Obsoletes:
NES Jaws by SpaceColonizer in 03:05.15 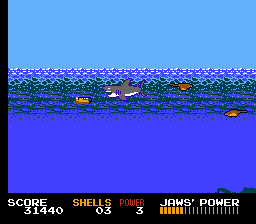 Watch on YouTube
Author notes Discuss
7.25 / 10
Published on 11/27/2022
This video game adaptation of Jaws appears to be based on Jaws: The Revenge, with some elements from the first Jaws movie. The game has you hunting down the shark as with the second half of Jaws, but it also appears to be set in the Caribbean like with Jaws: The Revenge. Unlike Jaws: The Revenge, you cannot survive being chomped on and dragged underwater by the shark.
SpaceColonizer opts to not die in this run to save time, which would have skipped a bonus stage as he collects shells to power up. The good thing is that by completing the bonus stage perfectly, enough points can be gained quickly enough to get the mini-sub, which can kill the shark more quickly.
See full publication history
Game:
Jaws
Genres:
Adventure 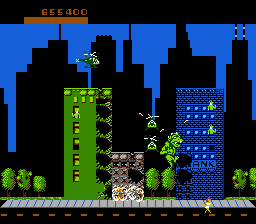 Watch on YouTube
Author notes Discuss
4 / 10
Published on 12/1/2022
Rampage is a monster arcade game developed by Bally Midway that was ported to many video game consoles during the '80s. The premise of the game is that three humans have became giant mutated monsters due to various experimental mishaps. Now that they're monsters, their goal is to roam the nation, destroy everything in their paths, and crush any and all opposition, whether it be civilians trying to defend their home to the military trying to bomb them down.
In this run, SpaceColonizer chooses one player mode and plays as the lizard monster, completing all 128 levels as fast as possible.
See full publication history
Game:
Rampage
Genres:
Action

Tags:
One player in a multiplayer game
Heavy luck manipulation