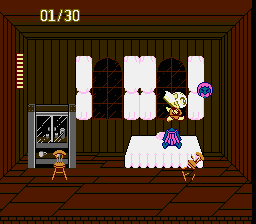 Watch Download (.fcm)
Author notes Discuss
5.03 / 10 Votes: 22
Splatterhouse: Wanpaku Graffiti looks like a parody of the other more serious Splatterhouse games. Armed with a big meat cleaver, you fight various bizarre creatures such as a purple woman's severed head, spiders bursting out of a woman's gut, and Synchronized Dancing Dracula and Zombies (TM).
This movie by Diman tries to do something interesting during the waiting times.
Viewers who have photosensitivity problems may want to avoid watching as there's a high amount of flashing visuals after defeating the final boss fight which can become uncomfortable to watch.
Published on 12/15/2006 12:00 AM
See full publication history
Game:
Splatterhouse: Wanpaku Graffiti
Genres:
Action
Platformer