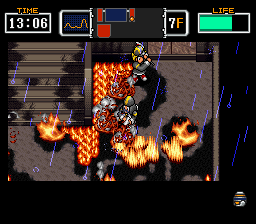 Watch on YouTube
Author notes Discuss
5.73 / 10
In The Firemen the player controls the fireman, Pete. The Metrotech building is a high-rise chemical plant, which today is hosting a Christmas party, and a fire! Gameplay follows Pete and his sidekick Danny, but there are also three other members of the unit that show up in cutscenes. Their plan is to collect the dangerous explosive MDL from the basement, and use it to blow up the water tank on the roof! The game is set in New York, but it never got a US release.
This run uses the invincibility after taking damage from small fires to get past larger fires. Water grenades can greatly speed boss fights, so the route takes detours to pick some up. Explosions from spraying certain windows is used, because it puts out nearby fires. Boss-battles are finished near the door to save time when the game auto-leaves the level.
Published on 1/10/2013 4:18 AM
See full publication history
Game:
The Firemen
Genres:
Adventure