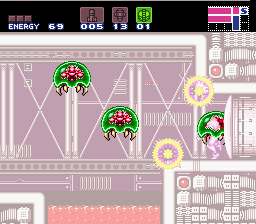 Watch on YouTube
Author notes Discuss
7.34 / 10
Super Metroid is a game that requires very little introduction. Samus Aran, a bounty hunter, returns to the planet of Zebes, in order to explore its depths, and defeat Mother Brain and the Space Pirates.
Watch as Samus smoothly glides through the game, cheating death by hitting 30 energy at multiple areas, collecting refills at every turn with minimal to none delays, defeating everything with the omega, the unstoppable, the almighty POS Power Beam, and taking on the Metroids with, not the Ice Beam, but Power Bombs!
Published on 12/18/2012 2:38 PM
See full publication history
Game:
Super Metroid
Genres:
Action
Adventure
Platformer