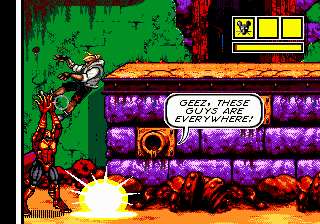 Comix Zone is a 1995 beat 'em up video game developed and published by Sega for the Sega Genesis. An unusual feature of the game is that it is set within the panels of a comic book with dialogue rendered within talk bubbles and sprites and backgrounds possessing the bright colours and dynamic drawing style favoured by superhero comics.
Sketch Turner, a "starving artist" and freelance rock musician living in New York City, is working on his newest comic book, named the "Comix Zone". One night, while Sketch is working on Comix Zone during a thunderstorm, a lightning bolt strikes a panel of his comic. In this instant, the main villain of Comix Zone - a powerful mutant named Mortus - manages to escape the comic book's pages, desiring to kill Sketch so he can become flesh and blood and take over the real world. Because he does not possess any power in reality, Mortus sends Sketch into the world of his own comic, freely drawing in enemies attempting to kill him.
Comix Zone is an action platformer in which players control Sketch as he progresses through panels of his comic book, hoping to reach the end and escape before his own creations finish him off. Each level consists of two pages and secrets are discovered by shredding the paper and revealing items. Along with standard attacks such as punching, kicking and jump attacks, Sketch can store up to three items in his inventory to help him overcome obstacles.
Archanfel improved the predecessor movie by 54.21 seconds thanks to faster strategies and manipulations.
Published on 11/25/2018 9:37 PM
Obsoletes:
Genesis Comix Zone by xoinx & XYZ in 09:34.88 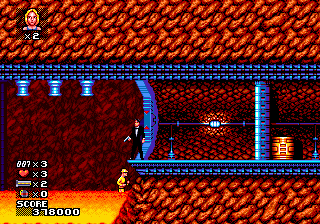 Watch on YouTube
Author notes Discuss
7.12 / 10
James Bond 007: The Duel is a sidescrolling platformer featuring a storyline that is not based on a James Bond film. A mad professor has commandeered a Caribbean satellite launch center and is planning to use its technology to take over the world, and only 007 can stop him!
The game requires precision in jumping, as Bond will easily die if he falls from high places. Bond's gun also needs to be reloaded on occasion and ammo needs to be conserved. Besides shooting the bad guys in his way, Bond has to find all of the female hostages and set bombs in each base in order to proceed.
Archanfel improves the previous run by 2 minutes and 21.13 seconds thanks to better optimization and new tricks like dying to save time and using minor bullet damage to avoid lethal falling damage from great heights.
Published on 10/12/2015 8:36 PM
Obsoletes:
Genesis James Bond 007: The Duel by Dimon12321 in 11:46.39 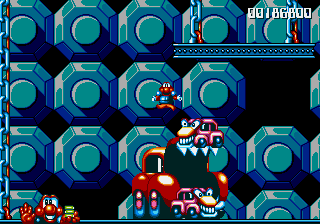 Watch on YouTube
Author notes Discuss
7.3 / 10
In his second adventure, James Pond must save Santa Claus's toy workshop from Dr. Maybe. Pond has been equipped with a robotic suit--hence the code name "RoboCod"--due to the challenges of the mission. It includes an Inspector Gadget-style stretch device, which he can use to view higher areas or claw onto ceilings and slide across them.
This run saves 3049 frames over the previous one but is longer because it completes the two secret levels. Time savings come from faster boss fights, avoidance of unnecessary bonuses, better HP management, and more optimized movement.
Published on 3/31/2019 8:04 PM
Obsoletes:
Genesis James Pond 2: Codename: RoboCod by Archanfel in 24:20.46 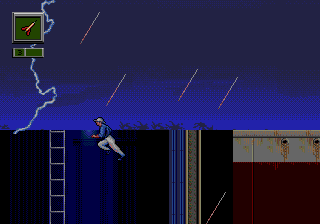 Watch on YouTube
Author notes Discuss
7.45 / 10
Jurassic Park: Rampage Edition is a 1994 side-scrolling video game developed by BlueSky Software and published by Sega for the Sega Genesis. It is the sequel to Sega's previous Jurassic Park video game, based on the film of the same name and also released for the Genesis. Jurassic Park: Rampage Edition is a revamped version of its predecessor, featuring similar gameplay with several changes, and a new story that continues from where the previous game ended.
This game features fascinating graphics, and the glitches Archanfel abuses are just as stunning! Watch him zip and clip through the entire game under 3 minutes.
Hint: Hover the mouse over the screenshot.
Published on 12/2/2018 9:28 PM
See full publication history
Game:
Jurassic Park: Rampage Edition
Genres:
Platformer

Genesis Mickey Mania: The Timeless Adventures of Mickey Mouse by emu & Archanfel in 20:31.32 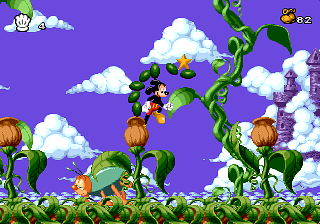 Watch on YouTube
Author notes Discuss
6.57 / 10
Mickey Mania is a 1994 platformer video game developed by Traveller's Tales and published by Sony Imagesoft for Sega Mega Drive/Genesis, Mega CD, and Super NES. In the game, the player controls Mickey Mouse, who must navigate through various side-scrolling levels, each designed and based from classical Mickey Mouse cartoons from 1928 to 1990.
Archanfel improves emu's run of this game by about 11 seconds thanks to a new route in "Mickey and the Beanstalk." There are only minor changes in the rest of the run, so emu is still listed as a co-author.
Published on 5/22/2015 4:45 PM
Obsoletes:
Genesis Mickey Mania: The Timeless Adventures of Mickey Mouse by emu in 20:42.37 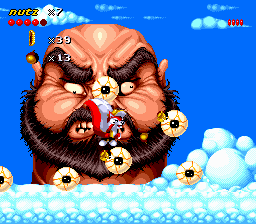 Watch on YouTube
Author notes Discuss
7 / 10
This game is a classic side scrolling 2D platformer, about an anthropomorphic crazy squirrel Mr. Nutz. He is only one who can stop a dictatorship of yeti Mr. Blizzard and his henchmen who want establish eternal winter.
Published on 12/5/2014 8:23 PM
See full publication history
Game:
Mr. Nutz
Genres:
Platformer 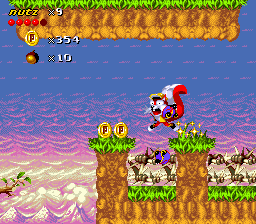 Watch on YouTube
Author notes Discuss
7 / 10
This game is a classic side scrolling 2D platformer, about an anthropomorphic crazy squirrel Mr. Nutz. He is only one who can stop a dictatorship of yeti Mr. Blizzard and his henchmen who want establish eternal winter.
Published on 12/12/2014 5:15 PM
See full publication history
Game:
Mr. Nutz
Genres:
Platformer

Genesis The Flintstones by Archanfel in 17:05.99 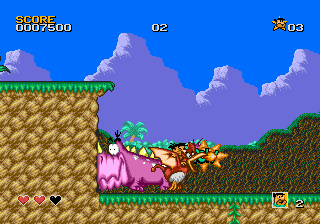 Watch on YouTube
Author notes Discuss
6.29 / 10
The Flintstones a classic 2D platform video game based on the famous Flintstones animated series from 1960s. Developed by Taito Corporation released in 1993, exclusively for the Sega Mega Drive/Genesis.
There are six levels, in each one Fred must complete a small quest: retrieve a lost necklace for his wife, find his son lost in the desert, liberate pterodactyls race from the yoke of the evil witch, etc. The gameplay involves mostly jumping and hitting the enemies in the heads with a heavy cudgel.
Published on 9/13/2015 9:46 AM
See full publication history
Game:
The Flintstones
Genres:
Platformer 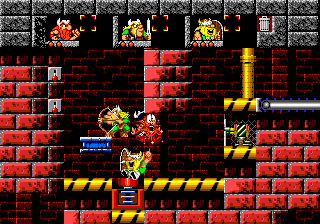 In this action/puzzle game, you control three Vikings lost in time and space, each with their own special abilities needed to solve the levels.
This movie controls three characters simultaneously. Archanfel manages to improve the previous TAS by 8 minutes and 17 seconds through much better optimization. See the author's comments for what was improved.
Keep in mind that only Vikings that are onscreen can be controlled.
Published on 5/10/2015 5:02 PM
Obsoletes:
Genesis The Lost Vikings "3 players" by Ouzo in 35:44.60

Genesis The Pirates of Dark Water by Archanfel in 14:14.92 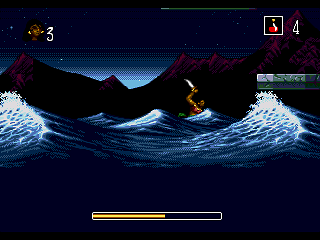 Watch on YouTube
Author notes Discuss
8.11 / 10
The Pirates of Dark Water is remarkable for its eccentric setting, utilizing the source material's melding of swashbuckling adventures, sword-and-sorcery fantasy, and Road Warrior-inspired fashion aesthetics. Drawing from the cartoon's backstory, players fight rival pirates as well as fantastic creatures sent to hinder the heroes from finding the Treasure of Rule by the evil pirate-lord Bloth.
The game features the main crew of the 1990s TV show - Ren, Ioz, and Tula - searching for the Treasures of Rule in order to rid the world of Mer of the Dark Water and return Mer and Ren's homeland, Octopon, to its former glory.
Published on 2/9/2016 3:30 PM
See full publication history
Game:
The Pirates of Dark Water
Genres:
Platformer 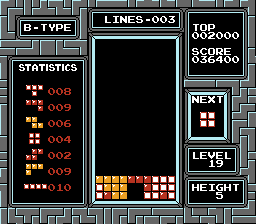 Watch on YouTube
Author notes Discuss
6.96 / 10
This movie completes the B-mode of Tetris at level 19-5. Its goal is to clear all blocks from the screen upon the final line cleared (known as a "Bravo" in some games). And of course it aims to do this as fast as possible.
This run is 00:01.90 seconds faster than its predecessor.
See this movie played back on a real NES right here.
Published on 6/14/2020 6:47 AM
Obsoletes:
NES Tetris "Mode B" by Baxter in 00:38.85 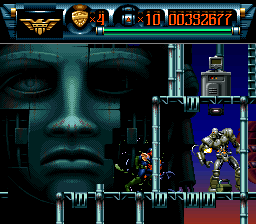 Watch on YouTube
Author notes Discuss
7.28 / 10
Judge Dredd is a platform action game based on the British comic book character of the same name and the 1995 movie that tarnished that name. The game was a multi system release so it fits the standard console jump/shoot/duck formula although it does add some unique twists such as wounding enemies so that they surrender and can be arrested.
The initial levels follow the plot of the movie with futuristic lawman Judge Dredd framed and sent to the Aspen penal colony from which he must escape and prove his innocence. Following the fight at the top of the Statue of Liberty that ended the film, the game continues on with levels and characters inspired by the comic book culminating with a battle against the Dark Judges on Deadworld.
In this run, Archanfel improves upon the previous publication by 03:36.61 minutes thanks to some new glitches and changes to the route.
Published on 4/25/2017 10:51 PM
Obsoletes:
SNES Judge Dredd by Archanfel in 24:54.41 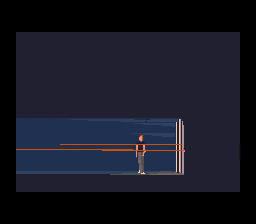 Watch on YouTube
Author notes Discuss
6.64 / 10
Out of This World, known as Another World in Europe, is a strange and difficult game. It was one of only a few SNES games to use loading screens.
This run obsoletes the previous movie by 00:26.37 seconds thanks to movement, shooting and shield optimizations.
Quoting bobucles's analysis of the game:
Oh, this game is great. I remember that at the beginning, the gun has exactly enough shots to make it past that first door. Shield, big blast, and kill the guards, then the gun runs out. Waste any, and you die. Classic.
Published on 9/6/2014 3:50 PM
Obsoletes:
SNES Out of This World by NitroGenesis in 13:58.85