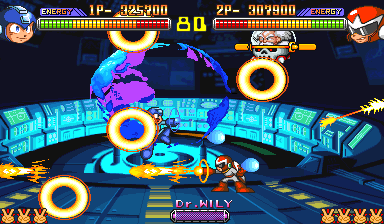 Watch on YouTube
Author notes Discuss
4.95 / 10
Mega Man 2: The Power Fighters is the direct sequel to Mega Man: The Power Battle. Like its predecessor, this arcade-only game does away with the levels of the classic Mega Man games and instead pits you against Robot Master after Robot Master. The game features four characters and three game modes to choose from, with different Robot Masters to fight in each mode.
For this run, Marx runs the "Search for Wily!" mode with 2 players at once, using both Mega Man and Proto Man to defeat each robot faster than just 1 player could. Though the battles are speedy, the brief waiting periods after each match allow some time for entertainment.
Published on 10/25/2012 12:00 AM
See full publication history
Game:
Mega Man 2: The Power Fighters
Genres:
Fighting 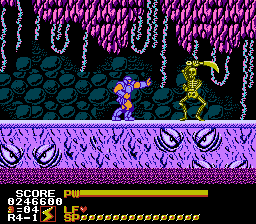 Watch on YouTube
Author notes Discuss
6.53 / 10
Astyanax (1990) is the story of a studly 16-year-old boy named Astyanax who is summoned to the world of Remlia in order to save the enchantress Princess Rosebud from the evil wizard Blackhorn, who wants to rule the world.
It is a somewhat clumsy game. For one, Astyanax is twice as big as he appears, and so he is easily hit unless one plays carefully. The controls are also very bad. The sum of these factors is that it's a difficult game to play, but that's part of what makes this movie interesting—especially for those who have played this game.
This is an improvement of 00:08.14 seconds from the previous movie mostly from improved boss fights near the beginning of the game.
Published on 4/13/2022 12:00 AM
Obsoletes:
NES Astyanax by Marx in 15:09.04