Watch on YouTube
Author notes Discuss
6.01 / 10
This run demonstrates Minesweeper's Last level of 7 missions being destroyed by Kiske in just under 30 seconds. In fact, the face at the top of the screen is so impressed it's constantly in awe.
This also beats the previous run by 00:00.33 seconds.
Published on 2/19/2014 12:00 AM
Obsoletes:
GB Minesweeper by Ryuto in 00:29.65 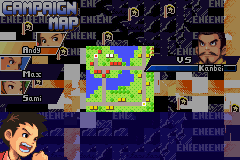 Watch on YouTube
Author notes Discuss
6.02 / 10
Without warning, the forces of Blue Moon mount an assault on the nation of Orange Star. Only Orange Star's new advisor, in collaboration with Orange Star's commanding officers, can stop them and get to the truth behind this sinister plot.
At least, that's what they'd normally do if they weren't capable of just magically compelling their opponents to surrender at the sight of them.
Using a glitch in the design maps mode of the game, this run by Kiske and mtvf1 completes the game impossibly quickly by forcing opponents to yield, allowing instant wins in the campaign missions. The author also improves the previous run by 00:12.81 seconds through new tricks and better use of the "force surrender" glitch.
Published on 3/22/2014 12:00 AM
Obsoletes:
GBA Advance Wars by criticaluser & sgrunt in 13:43.97 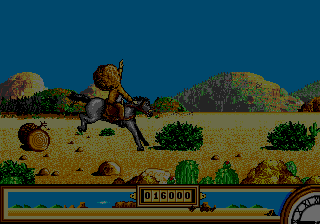 Watch on YouTube
Author notes Discuss
5.27 / 10
Back to the Future III is a collection of four arcade games. Marty McFly and Doc Brown have traveled back through time to the year 1885 – and they're soon deep in trouble when they face "Mad Dog" Tannen's gang and have to find a way to return to the present. This game takes four scenes from the Hollywood movie Back to the Future III and turns them into arcade sequences: Buckboard Chase, Shooting Gallery, Pie Throwing, and The Train.
Author Kiske runs through this short game using superhuman movements and a pause trick to manipulate luck.
Note that the Genesis version is normally this dark due to a programming error in the game, and not an emulation bug.
Published on 2/13/2014 12:00 AM
See full publication history
Game:
Back to the Future Part III
Genres:
Action 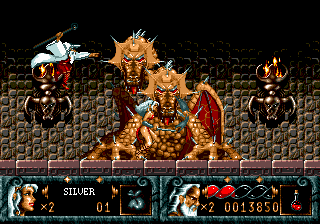 Watch on YouTube
Author notes Discuss
6.44 / 10
Blades of Vengeance is a platform game incorporating light RPG elements and character styling, reminiscent of Gods by The Bitmap Brothers. The Dark Lady has unleashed hordes of monsters whom the protagonist must slay. The player can choose from three main characters - the Huntress, Warrior and Sorcerer, all of which have different abilities. Throughout the game the player has the option to improve their powers by collecting armour and weapons (such as a mace and a crossbow) or by using spells. Each of the eight stages ends with a boss.
Published on 12/13/2014 12:00 AM
See full publication history
Game:
Blades of Vengeance
Genres:
Action

Genesis Boogerman: A Pick and Flick Adventure by Kiske in 20:14.00 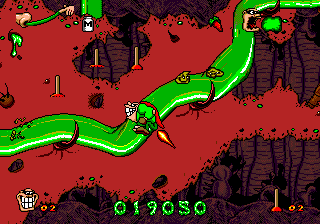 Watch on YouTube
Author notes Discuss
6.57 / 10
Boogerman is a jump-and-run game where the protagonist flicks boogers and farts at enemies in order to stand a chance against the evil Boogermeister. The game features about 20 levels of dirt, slime and bad taste in worlds like "Mucous Mountains", "The Pits" and "Flatulent Swamps".
Published on 2/5/2014 12:00 AM
See full publication history
Game:
Boogerman: A Pick and Flick Adventure
Genres:
Platformer