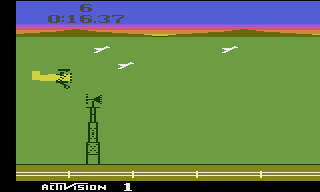 Watch on YouTube
Author notes Discuss
2.6 / 10
Barnstorming is an Atari 2600 video game designed by Steve Cartwright and published by Activision in 1982. The goal of the game is to fly through barns, while avoiding windmills and birds. There are four difficulties, going from 10 to 25 barns.
In this run, StarvinStruthers completes the easiest difficulty as fast as possible.
Published on 3/23/2017 12:00 AM
See full publication history
Game:
Barnstorming
Genres:
Racing 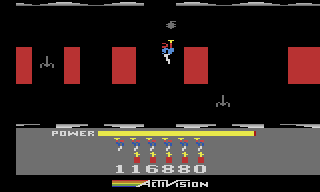 Watch on YouTube
Author notes Discuss
6.3 / 10
H.E.R.O. is a rare fast-paced platformer for the Atari 2600. You control a man with a gyropack who must traverse caves, avoid dangerous enemies, and use a few sticks of dynamite to blast open paths in order to rescue trapped miners.
StarvinStruthers improves upon the previous publication by 00:04.77 seconds, due to the use of a new glitch called the "Door Skip".
Published on 3/23/2017 12:00 AM
Obsoletes:
A2600 H.E.R.O. by FractalFusion in 09:55.78

Watch on YouTube
Author notes Discuss
6 / 10
Jurassic Park Part 2: The Chaos Continues is a video game and a non-canonical continuation of the Jurassic Park series, developed and published by Ocean Software for the Super Nintendo Entertainment System (SNES) and Game Boy. The Game Boy version shown here follows a completely different storyline than its SNES counterpart.
In it, the player controls Grant, whose vehicle at Jurassic Park has stopped functioning as the result of an intentional power outage. Grant moves through a rain forest and later takes a raft down a river, where he encounters aquatic reptiles. Grant ultimately reaches Jurassic Park's headquarters, where most of the power remains off.
Hetfield90 and StarvinStruthers run and shoot through the game in record time.
Published on 11/19/2016 12:00 AM
See full publication history
Game:
Jurassic Park Part 2: The Chaos Continues
Genres:
Action
Platformer

Watch on YouTube
Author notes Discuss
6.6 / 10
Kid Dracula (also known as Akumajou Special - Boku Dracula-kun) is simultaneously a remake and sequel to the Famicom game, which was only released in Japan. As a spinoff of the Castlevania series, this game is much more light-hearted, and features a quirky array of enemies that range from the standard skeletons, witches and ghouls to... ghosts, giant robots and aliens!?
Hetfield90 and StarvinStruthers improve the previous publication by around 27.3 seconds, thanks to much better optimisation.
Published on 8/21/2015 12:00 AM
Obsoletes:
GB Kid Dracula by Sir VG in 19:10.83

GB The Little Mermaid by StarvinStruthers in 06:42.23

Watch on YouTube
Author notes Discuss
6.38 / 10
The Little Mermaid is an action game by Capcom for the NES and Game Boy. It is a single-player side-scrolling action game where the player controls Ariel on a quest to defeat the evil Ursula, the sea witch.
In this run, StarvinStruthers swims his way through the game as fast as possible.
Published on 3/27/2017 12:00 AM
See full publication history
Game:
The Little Mermaid
Genres:
Action
Platformer