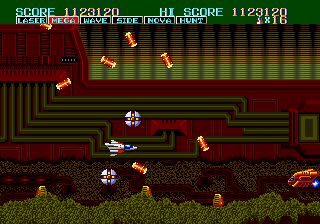 Watch on YouTube
Author notes Discuss
5.75 / 10
Thunder Force II for the Sega Genesis is a port of the Sharp X68000 game of the same name. It is both a side-scrolling shoot 'em up and a top-down shoot 'em up all in one. Compared to the X68000 version, the Genesis version cut some levels out and has some graphical downgrades, but features almost no lag.
The story of the game involves the ORN Empire, led by the rogue AI named Khaos, invading and pillaging planets that are part of the Galaxy Federation. In response, the Federation sends the ship Fire LEO-02 "Exceliza" to combat the ORN Empire and take down Khaos.
In this run, Darkman425 plays around with the side-scrolling stages and finds the quickest ways to beat the top-down stages. For details on the techniques used and how the levels were tackled, you can read the author's notes.
Published on 6/22/2022 12:00 AM
See full publication history
Game:
Thunder Force II
Genres:
Shooter