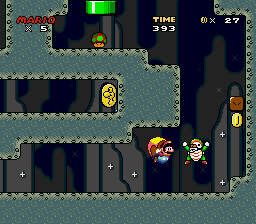 Watch on YouTube
Author notes Discuss
5.74 / 10
Super Mario World 64 is a pirated port of the SNES Super Mario World, made for the Sega Mega Drive by an unknown developer, at an unknown date (but most likely after the original release of Super Mario 64 in 1996).
In the game you play as Mario alone; Yoshi makes no appearance whatsoever. Holding A allows you to run, but the distance required before Mario starts running is longer than expected, making careful jumps that require the distance a bit tricky. Control in general is also very stiff.
Published on 7/27/2017 4:03 PM
See full publication history
Game:
Super Mario World 64
Genres:
Platformer
Unofficial game