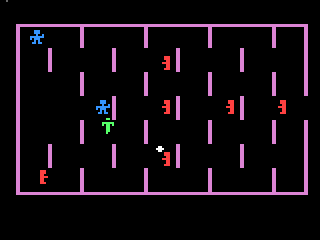 Watch Download (.bk2)
Author notes Discuss
5.09 / 10 Votes: 10
AMOK! is a homebrew Odyssey2 game, developed by John Dondzila and published in 1998 - the first O2 game to be released in 15 years after the console was initially discontinued. As with many later O2 homebrew games, it also had a limited cartridge release.
The gameplay has been likened to that of arcade classic Berzerk. The player has to shoot their way through enemy robots in top-down maze-like rooms and make their way to the exit. The walls are also electrified hazards, and running into one is instant death.
Noxxa completes one loop of the game in record time, while shooting as many targets as possible to reach a high score as a secondary goal.
Published on 4/11/2021 12:00 AM
See full publication history
Game:
AMOK!
Genres:
Action
Unofficial game