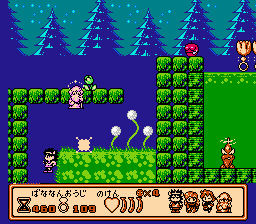 Watch on YouTube
Author notes Discuss
6.42 / 10
Bananan Ouji no Daibouken is a platform game only released in Japan and Germany (where it is known as Banana Prince).
One day in the Banana nation, the Banana Prince is conversing with the Dragonmaster when the evil Paprika Dragon flies in and steals the big banana, the symbol of the nation's wealth. While the Dragonmaster is at a loss as to what to do, the Prince decides to bring back the nation's most beloved possession to the people.
The author, khv-user, runs, jumps, and climbs his way to the Paprika Dragon and brings back the banana in only nine and a half minutes.
Published on 10/22/2011 12:00 AM
See full publication history
Game:
Bananan Ouji no Daibouken
Genres:
Platformer