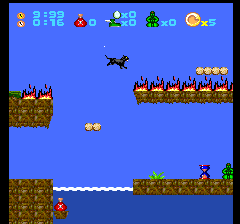 Watch Download (.bk2)
Author notes Discuss
6.41 / 10 Votes: 9
B.C. Dash is a platformer game for the Uzebox, developed by Paul McPhee and released on October 25th, 2009. The goal is to pass through a single long hazardous stage, filled with tricky jumps, awkward terrain, and many different artifacts and powerups along the way. After reaching the finish line, your fastest time is recorded and the stage loops again for another run.
Noxxa dashes through the game in record time.
This is the first ever Uzebox publication on this site. Quoting from the Uzebox wiki:
The Uzebox is a retro-minimalist homebrew game console. It is based on an AVR 8-bit general purpose microcontroller made by Atmel. The particularity of the system is that it's based on an interrupt driven kernel and has no frame buffer. Functions such as video sync generation, tile rendering and music mixing is done realtime by a background task so games can easily be developed in C. The design goal was to be as simple as possible yet have good enough sound and graphics while leaving enough resources to implement interesting games. Emphasis was put on making it easy and fun to assemble and program for any hobbyists. The final design contains only two chips: an ATmega644 and an AD725 RGB-to-NTSC converter.
Published on 7/22/2017
See full publication history
Game:
B.C. Dash
Genres:
Platform 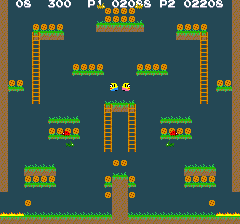 Bugz is an all-original 2D platformer, written specifically for the Uzebox. It has 21 levels, and the object is to collect all the cookies in each level without dying.
This game was run as part of TASVideos' Dream Team Contest 9, and this TAS was built on a combination of multiple submissions of said contest, which was further improved on.
The authors of this TAS go through the 21 levels in the 1P VS 2P mode (allowing one player to stomp on the other) in record time.
Published on 11/21/2020
See full publication history
Game:
Bugz
Genres:
Platform 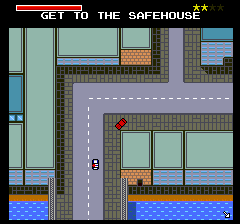 Watch Download (.bk2)
Author notes Discuss
5.82 / 10 Votes: 9
Joyrider is a topdown driving game for the Uzebox, in the style of the classic Grand Theft Auto and Driver games. It was created by James Howard (jhhoward) for the Uzebox Coding Competition 2014, where it won 1st place.
Like the classic GTAs and Drivers, it features a city to drive around in, with several things to do; free roaming, doing missions or participating in police chases for instance. The game has a story mode with three missions, and arcade/multiplayer modes with other activities.
Noxxa drives through the story mode in record time.
Published on 7/22/2017
See full publication history
Game:
Joyrider
Genres:
Action