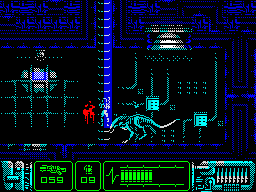 Watch Download (.bk2)
Author notes Discuss
6.42 / 10 Votes: 4
Aliens: Neoplasma is a game submitted for the ZX Dev MID Remakes competition. It takes place in the same universe as the Alien movies created by Ridley Scott. In this game, you play as a woman awaken from stasis to find her shipmates all dead and the ship overrun by aliens. As with most Aliens based stories, the AI on the ship has decided that the alien creatures are more important than yourself and is trying to get them back to Earth at all costs. You are tasked with escaping the ship by running around and activating various terminals to open doors to new pathways through the ship; ultimately leading to the escape pod.
DrD2k9 rushes to the escape pod in record time.
Encoder's Note: The first 7 minutes is dedicated to loading. The game loads at 6:55.
Published on 2/8/2020
See full publication history
Game:
Aliens: Neoplasma
Genres:
Action
Unofficial game 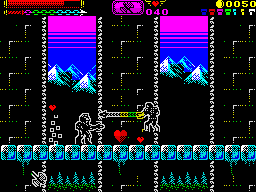 Castlevania: Spectral Interlude is a Castlevania fangame for the ZX Spectrum, developed by Rewind and released in 2015. It mostly pays homage to the classic Castlevania games of the NES era, particularly Simon's Quest, but also takes on elements from later "Metroidvania"-style titles in the series.
Plot-wise, the game is set in the early 1800s, a few decades after Symphony of the Night, with the plot aiming to explain the disappearance of Richter Belmont and the Belmont clan after said game. The protagonist of the game is Richter's son, Simon Belmont (named after his ancestor of classic Castlevania fame), who with the help of sorcerer Joseph aims to remove Dracula's evil influence on the world by collecting demonic altar pieces, summoning Dracula, and whipping him to death as usual. However, some things don't go exactly as planned...
Noxxa achieves 100% completion and defeats Dracula in record time. Said 100% completion consists of the following:
This is the first ever ZX Spectrum publication on this site.
Published on 8/29/2018
See full publication history
Game:
Castlevania: Spectral Interlude
Genres:
Action
Platform
Unofficial game 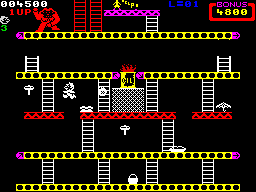 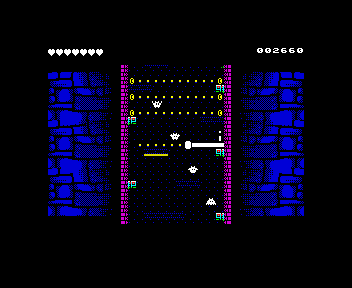 Watch Download (.bk2)
Author notes Discuss
7.06 / 10 Votes: 4.5
Old Tower is a homebrew game for the ZX Spectrum in which the protagonist must collect coins while avoiding bats. Some levels require the player to switch between two characters in order to reach all of the coins.
In this run, EZGames69 & Alyosha improve the previous movie by 00:04.17 seconds.
Encoder's Note: The first 9 minutes is dedicated to loading. The game loads at 9:33.
Published on 12/21/2019
Obsoletes:
ZXS Old Tower by EZGames69 in 13:04.04 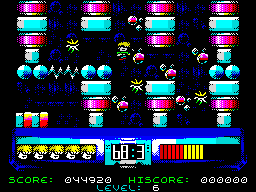 Watch Download (.bk2)
Author notes Discuss
7.34 / 10 Votes: 5.5
Space Monsters Meet the Hardy is a 2019 ZX Spectrum game made for the Yandex Retro Games Battle. You are tasked with taking out the leaders of the space monsters, who are hidden in mazelike levels. But time is limited, and you only have one weapon: your trusty laser pistol. For you to succeed, you must be both fast and accurate.
DrD2k9 ignores the danger and races across the alien world, sometimes directly through enemies in his path. With a few movement tricks up his sleeve, he completes Hardy's mission in just 10 and a half minutes.
Encoder's Note: The first 9 minutes is dedicated to loading. The game loads at 8:57.
Published on 2/9/2020
See full publication history
Game:
Space Monsters Meet the Hardy
Genres:
Platform