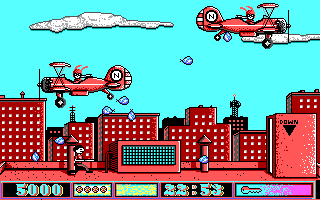 Watch
Avoid the Noid is a platform computer game for the Commodore 64 and MS-DOS, written in 1989 to promote Domino's Pizza. It was modeled after the company's ad campaign during the late 1980s. The ads featured a "noid" that destroyed pizzas and must be avoided.
The protagonist must traverse a 30-story building and deliver the pizza within 30 minutes. Colorful rabbits armed with booby traps, phone bombs, rocket launchers and bomber planes that drop water balloons seek to prevent the delivery.
Partners in crime turska & Ilari deliver the pizza in a record-breaking 03:33.52, or 7:42.00 according to the ingame clock. For details on how they did it, read the authors' commentary.
The baseline tab shows the default movie beating the game as fast as possible without any special conditions.