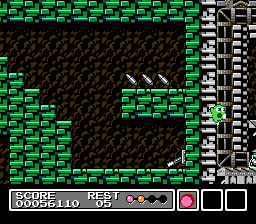 Watch
Gimmick! (1992) is another gem from Sunsoft, the company that brought us Ufouria and Journey to Silius. It was only released in Japan and Scandinavian countries, but eventually achieved something of a cult status thanks to its refined gameplay, as well as exceptional music and graphic design.
The plot follows a green toy on a quest to rescue a little girl from the clutch of other toys, who were rightfully upset at her forsaking them in favor of our protagonist. What these other toys can't do, however, is conjure stars to use them both as projectiles and very effective transportation devices!
This venture between Aglar, Hotarubi and Samsara improves the previous movie by 00:46.87 seconds thanks to a new zipping glitch that skips most of Stage 5 and a new clip that skips most of Stage 6. This run doesn't collect the special items required to access the 7th level, and thus gets a bad ending. However, we have another run that attains the best ending for your viewing pleasure!
This run has been console verified using micro500's TASLink replay device (3.5 ms timing window). 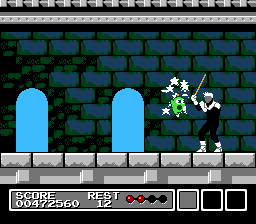 Watch
A short Japanese game about a small green toy who can summon stars to help him defeat monsters and to use them as platforms to reach high places and travel fast.
In this movie, the authors collect all of the items to enter the secret 7th level after the boss at the end of the 6th level, and do so 2 minutes and 15 seconds faster than the previous movie.
The game cartridge of Gimmick! contains a special microchip, FME7, which extends the number of sound channels in the game from 5 to 8, creating a more melodic soundtrack than in most other NES games.
This movie has an Atlas Map encode of Level 6, which shows the standard encode overlaid on a zoomed out map.
If you like this, be sure to check out the other run of this game, which skips the secret items.
Watch this run being played back on a real console.
The baseline tab shows the default movie beating the game as fast as possible without any special conditions.