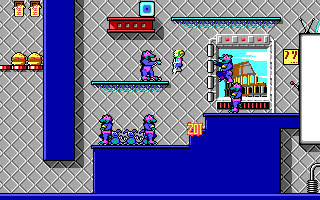 Commander Keen 2: The Earth Explodes is the second game in the Commander Keen saga. Keen has assembled his ship in Mars and returned home, only to find the Vorticon Mothership hovering over the Earth, ready to destroy all of Earth's cities and wonders! Keen must sneak aboard, stop the imminent destruction of Earth and find a way to neutralize the Mothership. If he fails, the Earth will explode.
In the middle of the night, while his parents think he is asleep, Keen returns to his backyard clubhouse, his Bean-with-Bacon Megarocket still cooling down from his recent Martian excursion. He flies to the Vorticon Mothership, sneaks aboard and docks his ship at the weakest area, the Bottom Galley. With incredible luck, Keen finds a nearly empty Vorticon HyperPistol, the weapon of the Vorticon Elite. It's not much, but it'll be enough to take out the X-14 Tantalus Rays and save Earth!

Watch
Commander Keen 2: The Earth Explodes (1990) is the second game in the Commander Keen saga. In it, the Vorticon mothership intends to destroy Earth, and only eight-year old Billy Blaze, as Commander Keen, can save us.
Here the author beats back the Vorticon invasion in slightly under 5 minutes, leaving one to wonder why we here on Earth bother with military defense at all. It's not quite that easy though; reading the author's comments is recommended to understand the planning and manipulation required for Keen to waltz by Vorticon after Vorticon.
If you enjoy this movie, check out these other Commander Keen TASes, all by the same author.
The baseline tab shows the default movie beating the game as fast as possible without any special conditions.