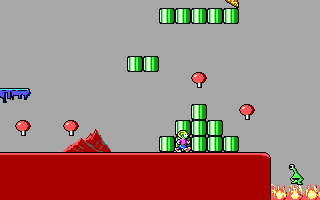 Commander Keen 1: Marooned on Mars is the first episode in the iconic game series, and the first game in the trilogy Commander Keen in Invasion of the Vorticons. It was developed by id Software a couple of years before Wolfenstein 3D and Doom.
Billy "Commander Keen" Blaze, an eight-year-old genius, has flown to Mars in his Bean-with-Bacon Megarocket he built out of common household objects. But while Keen explores Mars, aliens from the planet Vorticon VI find out about him and steal vital parts of his ship! To get back home, Keen must find the missing parts of his ship among the Martian cities. But danger awaits, as those Vorticons and their robots will try their best to stop him!

Watch
Commander Keen 1: Marooned on Mars started the iconic game series. In this episode, aliens from the planet Vorticon VI find out about the eight year-old genius and plan his destruction. While Keen is out exploring the mountains of Mars, the Vorticons steal vital parts of his ship and take them to distant Martian cities! Keen must wrest the parts back from their wicked, clawed hands.
In this run, the author takes back what is Keen's without firing shots at any organic lifeform. Reading the author's comments is recommended.
The baseline tab shows the default movie beating the game as fast as possible without any special conditions.