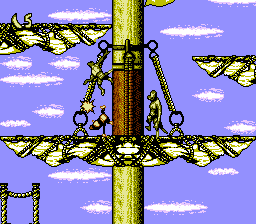 Watch
Super Donkey Kong 2 is a pirated Famicom port of the SNES game Donkey Kong Country 2: Diddy's Kong Quest published by NT in 1997.
The controls, graphics, and audio are similar to the SNES game, but downgraded to suit the NES hardware. The player can only control Diddy Kong alone, and due to the lack of Dixie Kong, a single hit from an enemy will result in death, much like in Super Donkey Kong '99. Several things from DKC2 are present in the game, including banana coins, crates, the K-O-N-G letters and the goal target at the end of the level which is also accompanied by Diddy's victory dance. Notably, there are only three levels in this game.
Watch this run being played back on a real console.
The baseline tab shows the default movie beating the game as fast as possible without any special conditions.