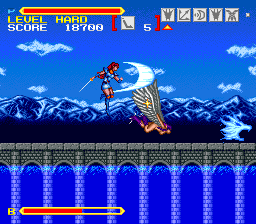 Watch
Once upon a time, there was a prince named Gallagher. He was entrusted with a magical ring that granted him great powers. But he was too weak to control the power of the ring, and became possessed by it. The mad prince was sealed into a crystal, but many years later managed to break out, planning to wreak havoc on the Dream World and conquer it. Yuko, the heroine of the three previous Valis games, is no longer a sacred Valis warrior - she has become a goddess. Lena, a young girl who wants to become a Valis warrior, must prove to Yuko she is worthy to wield the sword of Valis, that will eventually stop the evil plans of Gallagher.
The baseline tab shows the default movie beating the game as fast as possible without any special conditions.