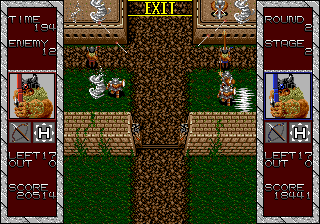 Watch
Gain Ground is a game about three warriors sent out to take down a rogue supercomputer by entering its Gain Ground battle simulator and defeating all the enemies the supercomputer can throw at them. They can also rescue hostages that are recruited in their battle against the supercomputer. Originally an arcade game, this Genesis port has 10 extra levels in it.
In this TAS, both player characters are controlled and shots are precisely placed to defeat every enemy in every level at blinding speed. Many precise tricks are used; details and stage-by-stage rundowns are available in the author's comments.