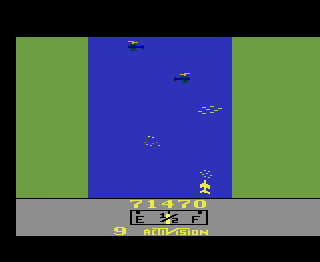 Watch
River Raid is an early vertical shooter where you fly a plane down a river and fire missiles to blow up helicopters, jets, ships and bridges.
As you can imagine, a tool-assisted speedrun turns this regular raid into an unstoppable barrage of destruction.
This movie obsoletes the previous one due to Lord Tom getting 1 million points instead of 100,000, thus reaching the true end of the game.
This run was performed by a bot coded by the author, based on a Java port of the game he wrote himself. For more on the extensive work put into this TAS, see the author's comments.
The baseline tab shows the default movie beating the game as fast as possible without any special conditions.