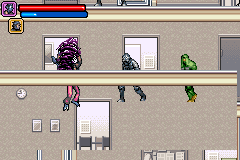 Watch
X-Men: The Official Game is Activision's tie-in video game to the 2006 film X-Men: The Last Stand. The game lets you control either Wolverine, Colossus, Iceman or Nightcrawler through twenty-five stages of a traditional side-scrolling beat'em up platformer. You move through the levels usually to find the exit. The stages can scroll from left to right, top to bottom or more like a labyrinth.
In this TAS, TehBerral makes extensive use of Nightcrawler's teleport glitch to beat the game in record time.
This improve the previous publication by 00:50.73 due to better optimizations and strategies.
The baseline tab shows the default movie beating the game as fast as possible without any special conditions.