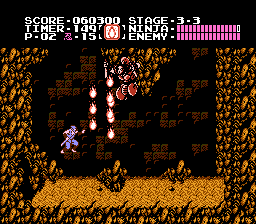 Watch
Ninja Gaiden involves an ultra superior ninja, capable of defying the laws of physics by climbing through walls, making dogs explode with his sword, and all while beating bad guys in record time.
After nearly 6 years, better knowledge of the game's emulation, and intensive bot-driven-exploration, this collaborative run by eien86 and Scumtron improves the previous movie by 1 frame.
Watch this run being played back on a real console. 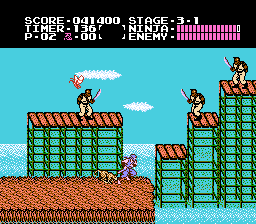 Watch
Ninja Gaiden is a classic action NES title known for its difficulty, starring famous ninja Ryu Hayabusa as its main protagonist. Ryu has just learned that his father has recently gone missing after being defeated in a dual against his rival. He must now take up his sword and avenge his father, all the while encountering government conspiracies and supernatural events.
In this run, a group of authors decide to eschew the usual ninja methods of killing anything that wants to hurt you and go for a pacifist run, only killing when necessary to progress. To accomplish this, the RNG was heavily manipulated and glitches were abused to skip as many fights as possible and reduce the number of enemies encountered. For more information, you can read the authors' notes here.
Watch this run being played back on a real console.
The baseline tab shows the default movie beating the game as fast as possible without any special conditions.