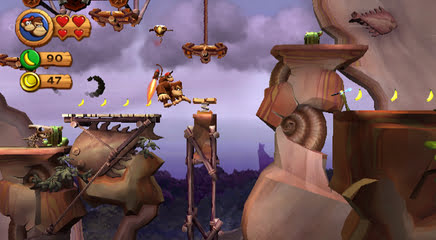 Watch
Donkey Kong Country Returns is a sidescrolling platforming game for the Wii released in 2010, and was the first mainline Donkey Kong game to be released in a long time. The plot follows the Island in which Donkey Kong lives on suddenly being swarmed by the Tiki Tak Tribe, who then hypnotizes the animals on the island to bring bananas to the volcano. Although the tribe was able to steal the Kong's banana hoard, for some reason Donkey Kong couldn't be hypnotized. After punching the Tiki creature out of his hut, Donkey Kong goes out to stop the Tiki Tribe and get back the banana hoard.
TheRandomMaster, SpeedyTheHedgehog & Jaiden all shake the Wii remote to roll their way to the top of the volcano and defeat the Tiki Tak Tribe in record time.
The baseline tab shows the default movie beating the game as fast as possible without any special conditions.