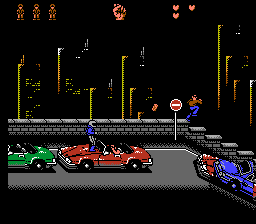 Watch
Last Action Hero is an NES game based on the movie of the same name. As with most movie licensed games at the time, it doesn't appear to have much to do with the movie itself. While the movie has a kid who gets himself trapped in another world bonding with his favorite movie star played by Jack Slater (a.k.a. Arnold Schwarzenegger), the game appears to just have Jack Slater himself go around punching bad guys and making things explode all to save the same kid from the big bad.
ShesChardcore has Arnold briskly jog their way through the game, tanking enemy attacks to get faster in order to beat the game as fast as possible.
The baseline tab shows the default movie beating the game as fast as possible without any special conditions.