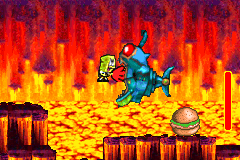 Watch
SpongeBob SquarePants: SuperSponge is a 2D platform game developed by Climax Group and published by THQ in 2001. The game is based on the Nickelodeon cartoon series of the same name. It is Patrick's birthday, and SpongeBob wants to give him "the best present ever": a photo signed by his favorite superheroes. However, the heroes want nothing more than to get rid of SpongeBob, so they keep sending him to accomplish random tasks around Bikini Bottom.
In this run, dekutony completes the game in less than 19 minutes using fine tricks in order to save time.
The baseline tab shows the default movie beating the game as fast as possible without any special conditions.