Wherein is provided an introduction to the submission
Heedless of the community's current strifes, sufferings, bickerings, and debates, the Ferret comes forth and presents to you all the run you haven't been waiting for. Shame on you people. It really is a nice little run. :|
Anyways...

The Story So Far


Wherein is given a brief synopsis of the plot
The kingdom of Zebulos, ruled by talking possums, is once again attacked, this time by the neighboring Gedol Empire, who decides to kidnap Princess Cherry, who is as blonde as possums can get. The reason for this is unknown. The other times the princess was kidnapped, it was for a practical reason, seeing how her necklace had on it the Key to Destroying Everything. Not this time. Maybe King Gedol looked up to his cousin Bowser and decided that he can a big ol' jerk like the best of them. "See, I can kidnap princesses too!" he could then brag at family reunions. If only he survived long enough to see the next one. Poser.
Moving along, Cherry's sister Sherry begs our hero Sparkster, rocket knight errant, to go and rescue her. He thinks that espionage is boring, so instead of infiltrating the Gedol empire with stealth, he goes in sword swinging and jetpack blazing, cutting down swaths of whatever poor lizardmen decide to get in his way.


Wherein is explained the game itself
This game, by all accounts, is the official sequel to the underground hit Rocket Knight Adventures, whereas the Super Nintendo version by the same title is simply some sort of spinoff. This is bizarre, because it is obvious that nowhere near as much effort was put into this one as was put into the other two. The graphics aren't as imaginative, the music suffers, and the controls - as can be read here - "have been run through the mud." Still, the game is more than worthy of being given the tool assisted treatment. Yeah, it's not as graceful as the RKA run, nor is it as manic as the Super Nintendo edition, but the speed and pacing is generally good, and there's a bunch of exploitable tricks that make some bosses fall very, very fast.


Wherein is generally expounded a few things about the run itself
In this game are seven different, hidden swords. Grabbing all seven causes Sparkster to go Super Saiyin for the final battle. Collecting them is optional, but this run goes for them anyway, mainly for the sake of completeness. Even though it does speed up the last boss a great deal, I doubt it saves any time simply because the first one takes about a minute to get.
Sadly, there's about a 9 minute block of autoscrolling, with a brief boss fight in the middle. That probably hurt this run more than anything else. Add on top of that the autoscrolling portion in the first level, and nearly half the run is auto. Gah! You have my permission to fast forward past these parts.
One of the nicer things about this game is that the jetpack charges automatically. This means I can attack to my heart's content while I'm holding onto a charge and not release it early. There were only a few times this got in the way because I only wanted a half charge instead of a full charge, but those were easily taken care of with a rolling attack.


Wherein is shown and explained how damage is dealt
The difference between a weak slash and a strong slash, both air and ground, is positioning and timing. I haven't quite narrowed down the specifics, but it seems you want to hit your opponent with the later end of the attack. Sometimes this doesn't work. I don't know.
Rolling Charge does the same damage, whether it be half or fully charged.
Fire Sword does double damage. However, mechanical foes (later marked as mech.) have a +1 fire defense, so fire attacks do one less than they would normally do.
In addition, some opponents have arbitrary defense (later marked as arb.). This means that regardless of what you hit them with, an attack will deliver only one point of damage.
The Fire Sword does not transfer between levels.
Sparkster's attack power does not go up when he goes gold. Instead, Gedol's health is cut in half and rounded up. The effect is nearly the same, though.


Wherein is laid out some stats and strategies for bosses and sub-bosses
Important Note! If you're using the memory watch, you'll notice that Gens reports values one less than what I give her for most of these values. This is because the game determines defeat not when the value is equal to or less than 0, but simply when it's less than 0. For reporting them here, I decided to go with the more conventional, former method so I just added 1 to them.
Also, I made up many of these names. I list them chronologically.
Keep in mind that these following values are based on the Very Hard difficulty, where many of these values are higher than on lower difficulties.
Axel Gear Mech
Flailing Trucks
Tree Face
Fatso
Robot Weapon
Fire Face
Snake God
Ninja Mage
Pig-Face Guards
Robo Guard Mini Bosses
Robo Guards
Axel Gear
Gedol


Wherein comments are given concerning each of the game's levels
The Prologue
I'm not entirely certain where this whole incident fits into the story; it seems Sparkster was on some archaeological dig before the game started for some legendary sword (the first of seven picked up) when Axel decided to interfere.
Level 1
Princess Cherry gets kidnapped by the traitor Axel while she, Sherry, and Sparkster were on some kind of trip.
Level 1-1
Sparkster starts his rescue mission by wailing on some trucks equipped with maces. The first one was dealt with about 7-8 times as I developed things like optimal approaches, maxing speed, and attack patterns.
Level 1-2
Sparkster continues by working through some more ruins that have been retrofitted with newer technologies.
Level 1-3
Sparkster now continues his way through a jungle. Here, the first bosses get faced.
Level 1-4
Sparkster comes across an enemy truck and decides to hitch a ride.
Level 1 Boss
Level 2
After taking out Gedol's secret weapon before it could be deployed, the truck wanders off aimlessly and eventually crashes in front of a desert pyramid that is being used as an enemy stronghold.
Level 2-1
Level 2-2
Level 2-3
Level 2-4
Level 2-5
Level 2-6
Level 2 Boss
Level 3
After taking out the base's general manager, the soldiers stationed at the pyramid realize that they are WAY over their heads with this possum, so they call for back up from the army's main air unit. Little do they know what this little punk can do to them.
Level 3-1
The goal of this section is to take out all the propellers and board the ship. To get to them, you enter into some portholes that shoot you out elsewhere. The whole time you're doing this, mines are fall from the sky. On very hard, these things are downright nasty since their increased lateral movement makes them very difficult to dodge, plus there's more of them.
Level 3-2
Level 3 Boss
Level 4
Our hero, upon trashing Gedol's airship, calls up his mech to raid the Gedol capital. Obviously an attempt to retread RKA's flight through the enemy city.
Level 4-1
Level 4-2
Level 4-3
Level 4-4
Level 4 Boss
All in all, a very boring five minutes. As I said earlier, go ahead and fast forward through this.
Level 5
Infiltration successful, Sparkster forges ahead inside Gedol's castle to pull Cherry out of it.
Level 5-1
Level 5-2

Level 5-3
Level 5-4
Level 5-5
Level 5 Boss
Level 6
Our hero's journey reaches its climax as he penetrates the heart of Gedol's stronghold, which leads him to some other dimension. The empire was based out of a different universe this whole time!
Fight With Axel
Gedol 1
Gedol 2
Well, that's it for Gedol. Time to rescue the princess, return her to her family, and give up this new found power.


Wherein comments to wrap the submission up are contained
Autoscrolling notwithstanding, I thought this turned out pretty well. It was certainly much easier to make than I anticipated. I guess it helps that pressing a single button causes the game to take over for nearly a second.
I think this is the most fun I had making a run in a while. It's fast paced, but easier to control when tool-assisted. Compare to Metroid II, which was tedious to make because I had to get myself into proper position nearly every single frame, whereas here I could just let the game take over for a little bit. Certainly it's improvable, but it's a step in the right direction.
Thanks to upthorn for explaining to me how the RNG for the bonus drop works. Also to Deign from whom I stole the idea of using character sprites to preface these sections.
Thanks for watching, and enjoy the show!
And Konami, please bring this character back. I don't mean that goof ball in New International Track & Field. Something more respectable than that. :(


Wherein an AI script attempts to take some screenshots from the run
NesVideoAgent: Hi! I am a robot. I took a few screenshots of this movie and placed them here. I'm not sure I got the right ROM though. (I tried Sparkster (U) [!].gen, which was the closest match to what you wrote.) Well, here goes! Feel free to clean up the list. 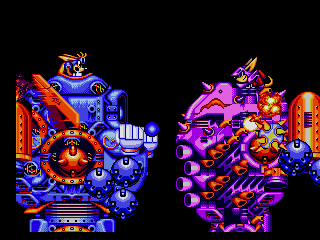 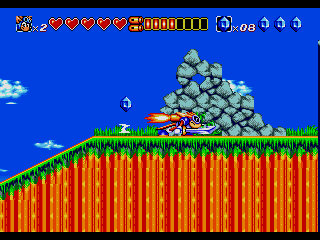 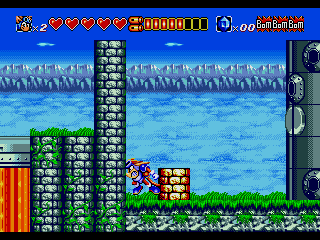 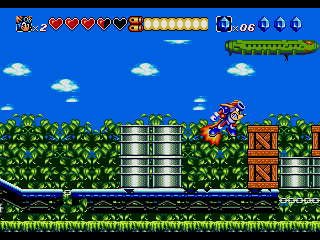 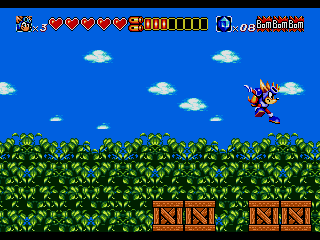 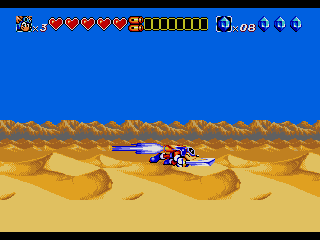 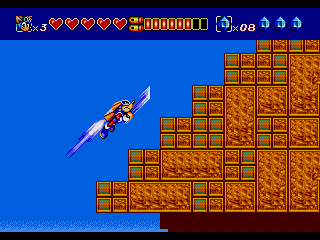 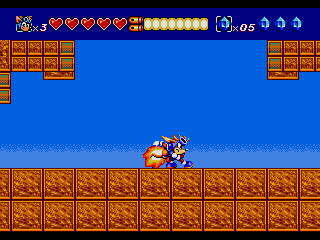 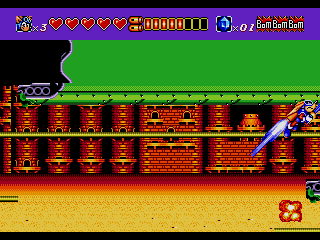 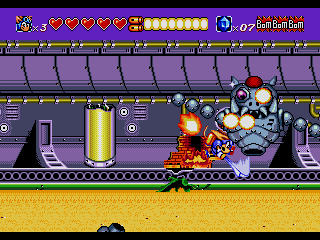 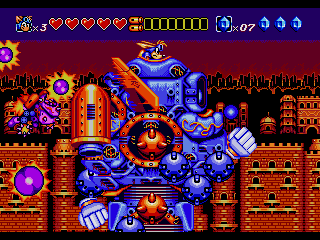 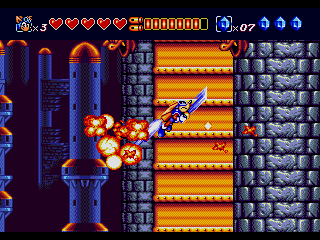 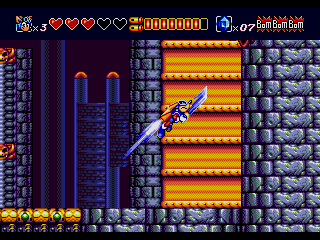 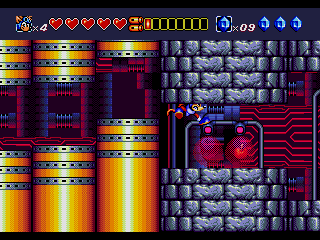 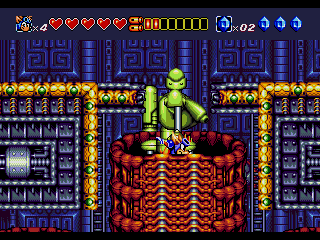 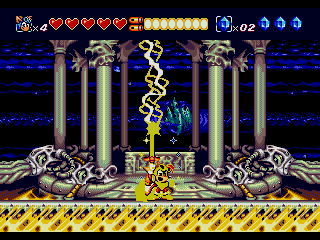 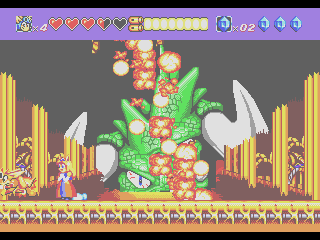 
Wherein comments regarding the fate of the submission are contained
mmbossman: While this game is slightly inferior to its brethren, it holds up very well to TASing. The platforming was wild and bouncy, and you did a commendable job with keeping the autoscrolling sections as entertaining as possible. And a very impressive submission text, to say the least. I hereby grant this run acceptance.
ShinyDoofy: Processing...
Last Edited by admin@tasvideos.org on 1/1/2022 6:13 PM
Page History Latest diff List Referrers