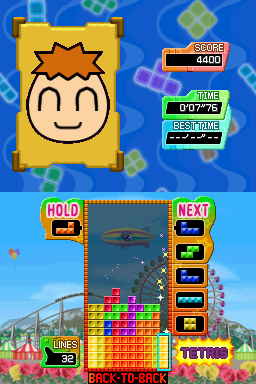 Watch
Tetris Party Deluxe released 25 years after the original incarnation of the popular puzzle game, on both the Nintendo DS and Wii. It features many new modes, including online multiplayer with up to 3 other players on the DS version.
This run by Mars608 completes the Sprint mode, commonly referred to as "40 lines". Focusing on the In-Game Time, it achieves a record-breaking 21"83, which is 1.33 seconds faster than the previous publication.
Note that the time appears longer; however, this is due to more accurate emulation.
This is the very first DS publication using BizHawk instead of DeSmuME.