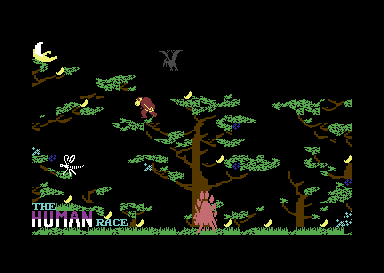 Watch
The Human Race is a video game published in 1985 on Commodore 64 by Mastertronic Ltd.. It's an action game, set in an arcade and platform themes.
The aim of the game is to achieve a high score. This is done by jumping around the screen and collecting objects. Each single screen level is set at a different point in man's evolution and sees the character start as an ape and evolve into a caveman and beyond as the player progresses through the game.
WARNING: Viewers prone to epileptic seizures should skip the encode to 06:16, as the game boot up screen involves heavy flickering.
The baseline tab shows the default movie beating the game as fast as possible without any special conditions.