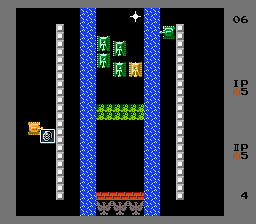 Watch
Battle City: Zeng Ge Hack is a Battle City hack made by Zeng Ge (also known as zyr2288). It features complete overhaul of the game and lots of challenging, novel mechanics that weren't present in the original.
Soig uses TAS tools to beat this game as fast as possible. Even though he makes it look easy, it still remains clear how hard this game is for a regular human.