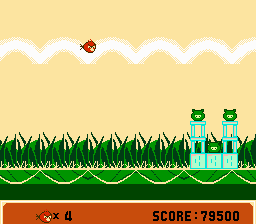 Angry Birds is an unofficial port of the famous Android/iOS game, in which you launch various birds at pigs who stole their eggs. It was made by a Chinese developer called Nice Code and uses original graphics and music.
Instead of touch controls or a cursor, you aim your bird using 5 preset launch positions on the slingshot. The bird's trajectory is influenced by both RNG and the game's timer.

Watch
Angry Birds is a series of games in which players use a slingshot to launch birds at pigs. This NES version is a bootleg made by the Chinese company Nice Code, and was included on some portable Famicom clones. It is not related to the other NES port made by an unknown developer.
In this run, ThunderAxe31 eliminates the pigs as quickly as possible while also maximizing the score.
The baseline tab shows the default movie beating the game as fast as possible without any special conditions.