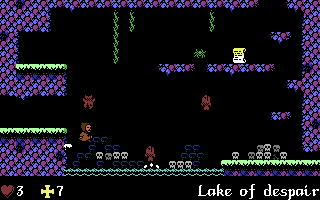 Watch
l'Abbaye des Morts (The Abbey of the Dead) is an exploration platformer game originally developed by Locomalito and Gryzor87, and released for PC in 2010 with a graphical style emulating a ZX Spectrum game. The Commodore 64 version, released 9 years later, features upgraded graphics thanks to significantly better hardware.
The game's official plot synopsis follows: "In the 13th century, the Cathars, clerics who preached about the poverty of Christ and defended life without material aspirations, were treated as heretics by the Catholic Church and expelled out of the Languedoc region in France. One of them, called Jean Raymond, found an old church in which to hide from crusaders, not knowing that beneath its ruins lay buried an ancient evil." Players take control of Jean Raymond, who can do no more than walk, crawl, and jump, as he explores the old church, discovering its terrible secrets the deeper he goes.
Noxxa collects the 12 crosses necessary to beat the game quickly and efficiently and brings them to the altar deep below the church, leading Jean to his unfortunate fate in record time.
The baseline tab shows the default movie beating the game as fast as possible without any special conditions.