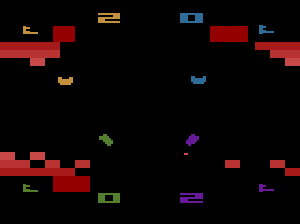 Watch
Warlords for the Atari 2600 is best described as a competitive multiplayer version of Breakout. Each player has a tiny hitbox defended by a wall that chips away with each hit from a bouncing ball and a shield to defend the wall with. A player earns a point each round when every other player's hitbox has been eliminated. The first one to five points wins the game.
As it turns out, at the highest difficulty, you can actually win the game without even moving the shield at all. ShesChardcore takes advantage of this and provides only a quarter of a second of input time, most of it just selecting the game with the hardest difficulty.
The baseline tab shows the default movie beating the game as fast as possible without any special conditions.