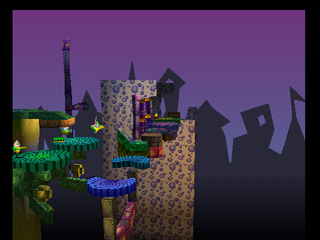 Watch
Pac-Man World is a 1999 video game for the PlayStation, released to coincide with the character's 20th anniversary, with Pac-Man going to a birthday party. It is a platform game played in a 3D environment that plays heavily into the history of the character; every non-boss level features a maze that plays by the rules of Pac-Man. Every level is littered with Pac-Dots, fruits and ghosts, and much of the music is modified from early entries into the series.
SFan and lapogne36 abuse various zig-zagging glitches in order to clear the game in record time. We recommend reading the authors' comments for more details.
The baseline tab shows the default movie beating the game as fast as possible without any special conditions.