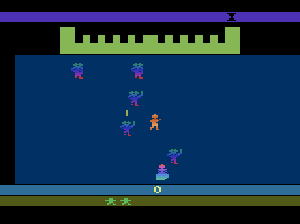 Watch
Krull is a video game adaptation of the science fantasy movie of the same name for the Atari 2600. The story is your typical "prince saves princess" plot, but in space. As for the game itself, it has five stages that very loosely reenact the plot. The most notable gameplay element is the final stage has you rescuing the princess "Breakout-style" while also fighting the final boss.
ShesChardcore completes one loop of this game in record time with a few deaths and movement quirks done to save time.
The baseline tab shows the default movie beating the game as fast as possible without any special conditions.