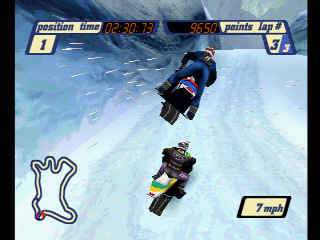 Watch
Sled Storm is a snowmobile racing video game published and developed by Electronic Arts. It gained critical acclaim due to its original concept of being one of the first snowmobile racing titles. It features snowmobiles (referred to as sleds), stunts and fourteen snow-covered courses consisting of slippery slopes, inclement weather and treacherous cliffs. Six racers were selectable from the outset and two more were unlockable, each of which had different snowmobile handling attributes.
somyeol and Gawrit show off a plethora of tricks and glitches in the game, which are detailed in the authors' comments. They make usage of in-game codes to unlock the Storm Sled and unlocking all of the Open Mountain tracks in order to do so.
Audio commentary by one of the authors can be found right here.