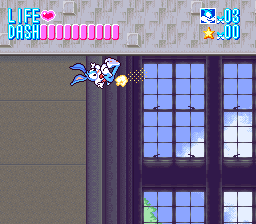 Watch
Tiny Toon Adventures: Buster Busts Loose! is a video game for the Super NES console that is based on the animated TV series Tiny Toon Adventures. It was developed and published by Konami, released in 1992 in Japan and in 1993 in Europe and North America.
This game features Buster Bunny in a side-scrolling adventure. Buster's objectives vary from level to level, ranging from feeding Dizzy Devil so he stops destroying the school kitchen to defeating "Duck Vader".
EZGames69 improves his previous TAS by 41.86 seconds, thanks to an increased usage of the screen wrap glitch. Please read the author's comments for more details.
The baseline tab shows the default movie beating the game as fast as possible without any special conditions.