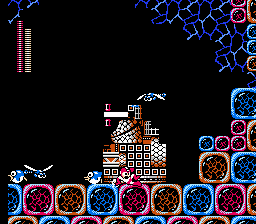 Watch
Mega Man 3 (ＵＳＡのロックマン３) is the first game in the Mega Man / Rockman series to introduce sliding (though the ability to charge the Mega Buster would have to wait until game 4). It also introduced Rush the robotic dog, who provides the abilities of Rush Coil, Rush Marine, and Rush Jet. Furthermore, after you beat the 8 robot masters, the game makes you revisit modified versions of four stages to fight the Doc Robots, who imitate the robot masters from Mega Man 2. This set a precedent in the Mega Man series to have additional stages between the main robot masters and Dr. Wily's fortress.
This run completes the game about 00:20.62 seconds faster than the previous movie thanks to a new route, more glitches, and better optimization.
This run was console verified using micro500's TASLink replay device (with a window mode of 3.5 ms).
The baseline tab shows the default movie beating the game as fast as possible without any special conditions.