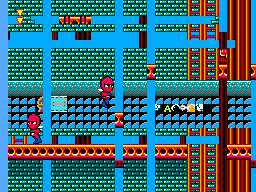 Watch
This is the final game of the Alex Kidd series, once Sega's flagship series. As the title suggests, this is a bit of a departure from the other games in the series and borrows concepts heavily from the Shinobi games.
Here, Alex Kidd's girlfriend has been kidnapped and he needs to go rescue her. In addition to his bizarre ability to use poles and ropes to turn into a fireball, he also apparently has the ability to use ladders to warp through solid walls.
The8bitbeast improves the previous run by 47 seconds, thanks to better optimisation and the addition of a major new trick which allows zipping across screens with the tornado powerup.
The baseline tab shows the default movie beating the game as fast as possible without any special conditions.