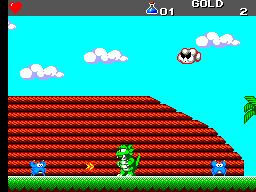 Watch
Wonder Boy III: The Dragon's Trap is a 1989 platform game by Sega and Westone. This game is a direct sequel to Wonder Boy in Monster Land and starts in the final lair of the previous game. According to Wikipedia, it is widely considered to be one of the best games produced for the Sega Master System.
The8bitbeast shaves off over ten and a half minutes over the previous run by grinding enough Charm Stones to open the Charm Stone door that takes you straight to the final boss.
The baseline tab shows the default movie beating the game as fast as possible without any special conditions.